Satellite positioning systems are generally referred to as GNSS. The abbreviation stands for Global Navigation Satellite System and refers to a complex of satellites and ground stations that can be used to determine positions and directions of movement of stationary or mobile receiver units ("GPS receivers", "GNSS sensors") on the basis of signal propagation time measurements.

The best known GNSS is the American GPS (Global Positioning System). In addition to GPS, various other GNSS such as GLONASS, GALILEO and COMPASS are operated or established.

In the 1970s, satellite systems were initially developed for military purposes only. As early as the early 1990s, the first attempts to determine yields with GPS were used. At that time, the accuracy was still around 100 meters. With the shutdown of the "Selective Availability" of the USA since the year 2000, a positioning between 10 and 20 meters became possible. In parallel, Russia is expanding its GLONASS satellite system, which can only be used for agricultural purposes since 2009. In 2014, the Galileo project was launched in Europe by ESA and is currently still under construction. It should be usable for agricultural purposes from this year 2020, as soon as the system is complete in its number of satellites. 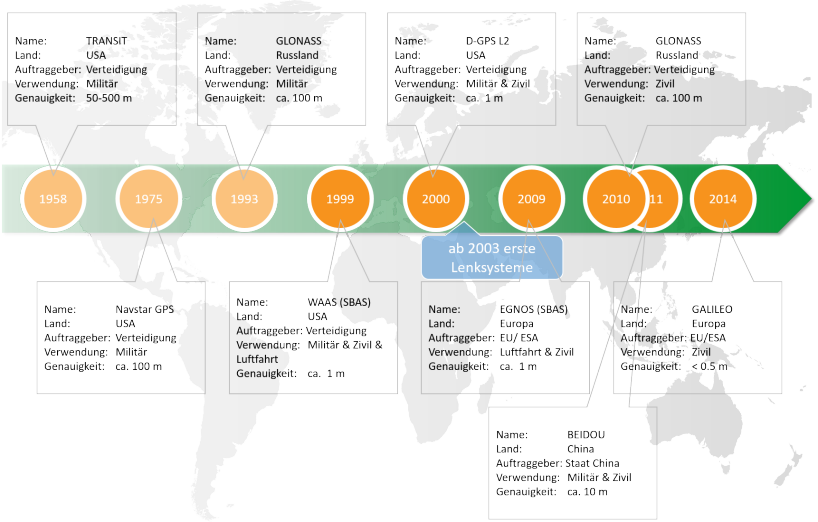 In the 1970s, the U.S. Department of Defense then developed and deployed another, but much more comprehensive global satellite positioning system called "NAVSTAR GPS" (Global Positioning System). This system replaced the Navy's first satellite system in 1985 and has been fully operational since 1990. The Global Positioning System did not become widely used as a navigation system in civilian applications until the year 2000, when the position determination reached an accuracy of 5 - 10m after technical optimization. GPS is currently the most important satellite positioning system.

In addition to the U.S. Department of Defense, the Russian Ministry of Defense also established a similarly structured satellite positioning system called "GLONASS" only a short time later. The development of the system was already started in 1972, GLONASS is officially operational since autumn of 1993 and only in 2010 it was released for commercial use (by ALB Bayern). Since 2014, Europe has been working on building its own satellite system: Galileo. This navigation system is based on a total of 30 satellites. The last four are scheduled to fly into space on a launch vehicle at the end of 2020. From then on, the services for position determination will be available.

LEO (low earth orbiter) Earth observation satellites: Used in agriculture and forestry (crop estimation, monitoring of grazing areas, detection of forest fires, estimation of environmental damage), cartography, geology (prospecting of mineral resources), oceanography and hydrology, and in climate research. These satellites are located at an altitude of 400 to 1000 km. The most famous satellites is the Sentinell family.

European Geostationary Navigation Overlay Service (EGNOS) is a European Differential Global Positioning System (DGPS) as an augmentation system for satellite navigation. It increases the positional accuracy of GNSS on a regionally limited basis in Europe. (Wikipedia) 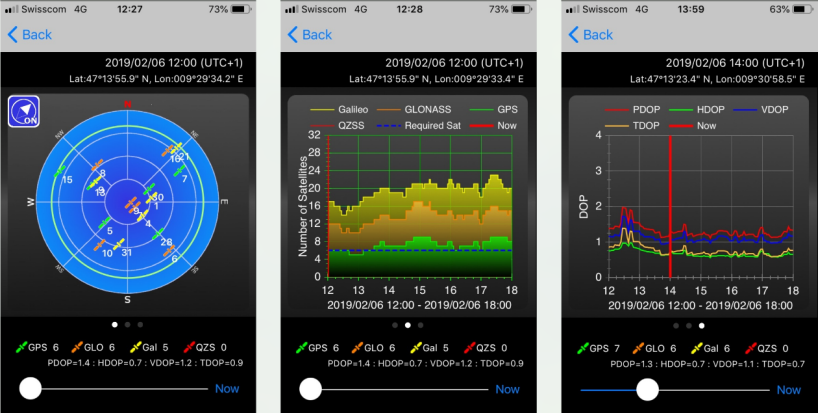 By means of various applications and apps, the signal strength and the number of available satellites can be displayed. 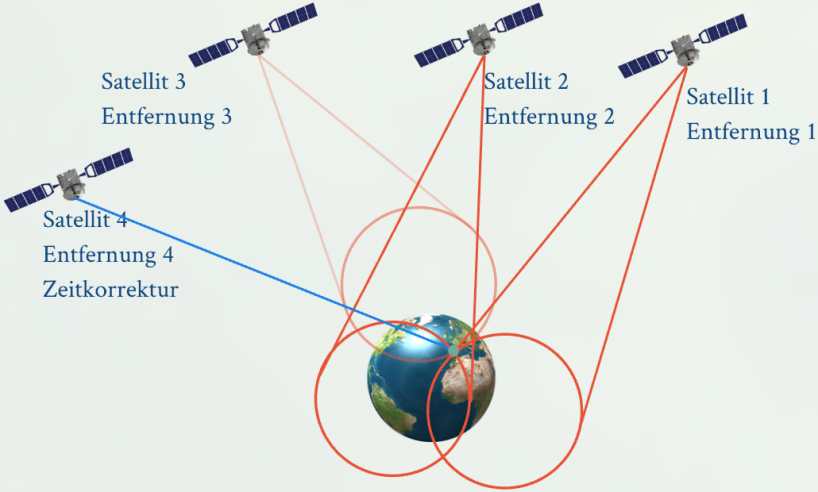 Satellite positioning systems work through an interaction of satellites, ground or base stations and the receiving devices (GPS device) on earth. In this process, position determination is based on the principle of time-of-flight measurement of signals.

The accuracy of GNSS sensors depends on various factors. Besides the quality of the antenna, the signal filtering and the algorithms for signal processing, the number of available satellites, the constellation of the satellites and the extent of atmospheric disturbances in the ionosphere are decisive. In addition, errors in satellite orbit determination and clock errors affect GNSS accuracy. The influence of the atmosphere and the satellite constellation are constantly changing.

Why are correction signals needed?

As described in the Interference Factors section, various factors affect the travel times of satellite signals to the receiver.

For the use of satellite signals in agriculture, a very high position accuracy is required, which is in the cm range. Without the inclusion of correction data in position determination, an average accuracy of about 10 meters is achieved. The inclusion of DGNSS has increased the position accuracy to about 1 meter. In recent years, continuous optimization of technology and elimination of propagation delay errors have made the signals more and more accurate. But it is only through the use of RTK that the highest accuracy and repeatability has been achieved.

Today, and in our region, correction signals are transmitted in two main ways: via satellite or mobile radio, and in the early days also via radio frequencies.

It is divided into single-channel systems (e.g. EGNOS, StarFire I, OmniSTAR VBS, Range Point RTX; TerraStar-L), which receive the correction data on the L1 frequency only, and dual-channel services (StarFire III, OmniSTAR XP/HP, Center Point RTX, TerraStar-C), which receive the correction data on the L1 and L2 frequencies. For L1 receivers, the correction data always comes via the closest reference stations in the vicinity of the signal receiver and is processed in the receiver for the best possible position determination. The two-channel correction signals are calculated by the so-called PPP method (Precision Point Positioning). The time corrections are generated by extrapolation and information from global reference stations. Due to the complex calculations, these systems often require a longer initialization time before use with the aim of achieving a higher absolute accuracy. 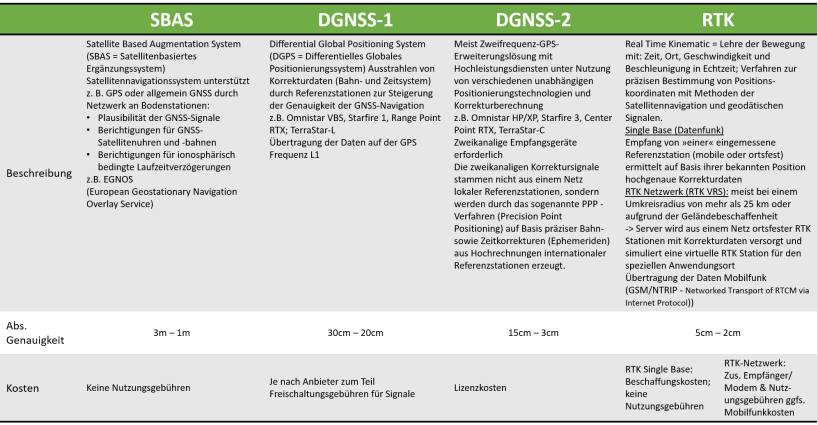 Positioning with GNSS is based on the measurement of signal propagation times from the satellite to the receiver. As a result, the accuracy of GNSS sensors depends on several factors. The fundamentals of positioning are in a constant state of flux due to changing influence of atmosphere and satellite movements. Therefore, various aspects influence signal strength and precise positioning, such as: the quality of the antenna, signal filtering, number and constellation of satellites, atmospheric interference factors, and signal processing algorithms. The number of available satellites and their position relative to each other are decisive for position accuracy.

Thus, availability and functional reliability are important for accuracy. These can be divided into the areas of satellites and correction signal. For the satellites, the more the better. Depending on the system accuracy, at least four satellites and, if possible, a clear view to the south are required to determine a position.

For practical application, a distinction is made between:

In order to be able to achieve the quality even with inclined fields, slope correction is necessary. Exact systems therefore have additional sensors integrated, which can compensate for the lateral offset.