From 2003, the first automatic steering systems for tractors were available. This technology has continued to develop and is certainly the most important application of satellite positioning systems in agriculture today.

For a position to be determined accurately, the connection from the receiver on the tractor to the satellites alone is not sufficient. The satellite signals are delayed on their way to the tractor. RTK correction data systems achieve the highest absolute and thus repeatable accuracy with 2.5 cm deviation from the actual position. RTK systems use fixed reference points located a few kilometers (max. 25 km) away from the tractor to correct for predicted orbit deviation, time-of-day errors, and signal propagation delays due to the ionosphere and troposphere. A GNSS receiver, called a base station, is located on the reference points. The correction information from the base station is transmitted to the tractor via mobile radio and, after being offset against the position data from the GNSS receiver on the tractor roof, results in the corrected precise position.

A distinction is made between three variants:

The signals are provided in an internationally standardized format (RTCM3 or CMR+), which can be used by all well-known providers.

Bridging in case of signal interruption

Since outages can occur during data transmission, the RTK GPS algorithms must be able to handle patchy data from the reference station.

Satellite-based guidance systems can be used to implement permanent lane systems that have been maintained over the years. This process is referred to as Controlled Traffic Farming (CTF).  According to an Agroscope study, the reduction of topsoil compaction improves air and water flow in the soil. Accordingly, the cropping systems become more yield-stable in dry periods and during heavy rainfall. Trial results show that CTF systems adapted to local conditions can sustainably improve the efficiency of soil protection and crop production even under Central European conditions.

Agroscope - Comparison of tracks in the field according to conventional procedure and CTF system with standard track widths - Source: sg.ch

One of the biggest challenges is to coordinate all working widths and track gauges with each other. This is particularly difficult when working with contractors or machinery pools. And even if all tires, tracks and working widths match, you usually have to decide at the headland whether to overlap or not to till. Weeds can grow within the lanes that are not tilled. In addition, permanent driving on the tracks can lead to groove formation, which in turn changes the sowing depth.

Permanent lanes show their effect especially for heavier machines for harvesting and organic fertilization. Such a "CTF-light", where permanent lanes are only used for heavy vehicles and machinery such as slurry tankers, could be a useful first step for CTF implementation. All work done under favorable conditions with low compaction risk and low contact surface pressures could be done without travel restrictions.

CTF systems are feasible in many areas with the standard machines available today. Permanent grassland, combine harvesting, corn and arable forage production can be mechanized relatively easily. In grassland, track area percentages of less than 15% can be achieved with working widths of 9 m and above, and in arable land of around 27% with 4.5 m.

When sowing with the Strip Till method, the soil is only worked in strips. This brings advantages for the emerging seed, which is laid in rows. However, it also requires precise work. As strip-till is basically a compromise between mulch seeding (plowless seeding method after a tillage operation) and no-till (seeding is done without any tillage after harvest).

The method is primarily used for row crops such as corn, sugarbeet or even canola, so that there is sufficient distance between the rows.

In the meantime, the strip-till method has become established for corn. In this case, strip tillage and the creation of slurry belts takes place on light soils about 3 to 5 days before sowing. In order to be able to place the grains exactly in the center of the strip during sowing, GPS-supported guidance systems are necessary, if possible with RTK correction signal. 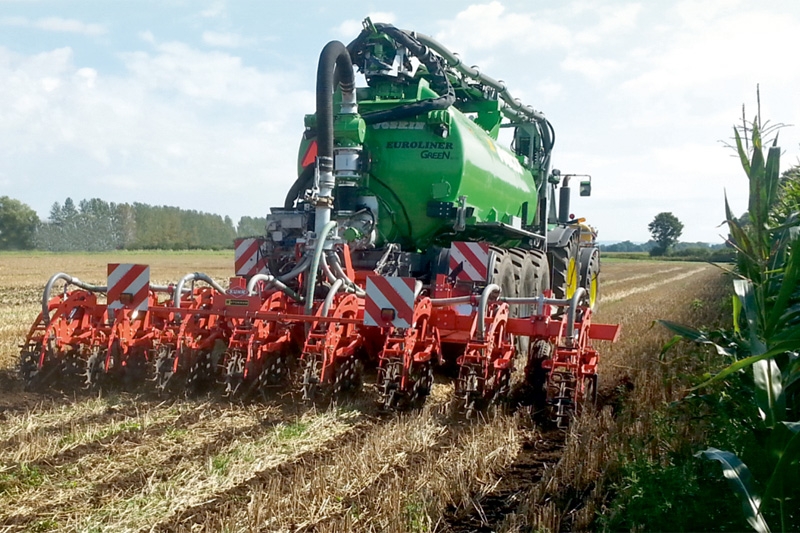 sowing and planting - Where is the benefit?

The most widespread use of satellite positioning systems in the control of attachments is section control or single row control. The English technical term for this method is "section control". It takes over the switching off and on of the part-width sections at the headland or at the edge of the field as soon as unwanted overlaps occur.

The position of the individual sections or rows of an implement is calculated from the position of the satellites and the direction of travel during field cultivation. Supplemented by further information on field boundaries, crop rows and areas already worked, the section function is activated. If a section, e.g. of a field sprayer or a sowing coulter, is located in the area that has already been treated or tilled, the section is switched off or the single row module is raised.

Advantages of this method arise from large working widths and in the case of misshapen field sections. By avoiding unnecessary overlaps, automatic part-width section control helps to save operating resources such as crop protection agents, fertilizer and seed. It can also reduce the risk of lodging and uneven maturation of the crop.

The basic technical prerequisite for the switchability of working widths is the electrical control of the boom sections or individual modules. This also includes:

The most common application is the use of field sprayers, followed by fertilizer spreaders, precision seeders and drill seeders. Example applications and the basic conditions:

Degree of overlap of the boom section control

The degree of overlap is set on the tractor terminal itself. In most cases, you can select between 0 and 100% overlap. Another factor influencing the overlap is, of course, the working width that can be switched off due to the design. The smaller this is, the smaller the part of the overlap.

The principle of plot-specific management is based on differences within a field. The heterogeneity of a plot is essentially due to different soil types with consequently different properties of water storage capacity, nutrient availability, soil temperature of the soil and different plant cover.  With site-specific seeding, an attempt is now made to pick up on these differences and optimally adapt the seeding rate to the respective yield potential.

Sowing adapted to the site

Through site-specific and site-adapted seeding, higher yields are expected compared to conventional seeding models, especially in dry conditions. A targeted distribution of the seed according to the yield zones is expected to result in more economical and ecological management.

For this purpose, zone maps have to be prepared. These maps are based, among other things, on satellite data (perennial), soil zoning results (soil sensors, soil scanning), yield maps (yield recording at harvest) or an overlap from these maps.

Accurate seeding with RTK steering system of the tractor and part-width section control of the machine. In addition, the seed drill must have a variable rate control function (partial area control) that can control each seed body individually.  Communication must work via Isobus or company-specific solutions.

In the yield zones, where soil conditions and nutrient supply are poorer, a lower seed rate is sown. In the higher value field zones, a higher seed rate is provided. Optimized plant stand space provides a better nutrient and water supply for the individual plants and they achieve better yields.

The solution of a site-specific grassland reseeding or automated site-specific meadow overseeding controls the demand-oriented reseeding quantity in an existing meadow.
A camera mounted in the front of the tractor scans the ground to determine the chlorophyll content and biomass by reflecting light of different wavelengths, detecting brown patches in the meadow. If gaps are detected in this way, a control system opens a corresponding seed line in the rear in real time, and seeds are distributed at the desired location via the metering unit. A subsequent packer roller presses on the seed. According to the developers, up to 70% of seed can be saved in this way. In addition, thanks to this smart technology, such over-seedings would also be resown earlier, which will ultimately lead to higher yields with better quality.