What is coconut milk?

Basic food in the tropics

This very positive correlation between coconut milk or coconut oil and a reduced risk of cardiovascular diseases is also indicated by epidemiological observations in peoples from tropical regions. There, coconut milk and coconut oil have been considered an important staple food for thousands of years.
And although these people cover their fat requirements almost exclusively with coconut products, heart attacks and strokes are completely unknown to them.
The warning about coconut oil and therefore also about coconut milk was and is, therefore, nothing more than a regrettable error.

At the end of the 1980s, for example, the Swedish scientist Lindeberg found a people on the island of Kitava in the Trobriand archipelago near Papua New Guinea who still lived exclusively on natural foods, i.e. who had largely retained their traditional way of life.
Industrially processed food was almost never consumed there. Coconut milk, coconut oil, and other coconut products made up a large part of the Kitava diet.

Coconut milk is quite fatty. Depending on dilution, it contains between 15 and about 22 percent fat. Compared to a cream made from cow's milk, this is still quite low, as it contains between 30 and 35 percent fat. However, coconut milk not only provides less fat, but also very special fat.
The fatty acids in coconut milk are the rare medium-chain triglycerides, also called MCT (Middle Chain Triglycerides). The special characteristic of MCTs is that they are burned to energy faster in the body than other types of fatty acids, which tend to cause the fat pads to grow.
Middle chain triglycerides are particularly useful for supplying energy to the lymph nodes and the liver.

Once the medium-chain triglycerides have entered the cell, they form smaller droplets to which enzymes can bind more easily and which can be converted into energy by the cell more quickly. MCTs are therefore less "fattening" than other types of fatty acids.
For this reason, Asian farmers apparently never give their animals coconuts - at least not when they want to fatten them up. The animal would always remain slim and athletic.
However, as with any food, coconut milk also offers the possibility of consuming MANY of them. However, if you overdo it with coconut milkshakes, coconut milk desserts, coconut milk smoothies, coconut milk soups, etc. - which is admittedly not difficult at all because coconut milk simply tastes so delicious - the positive effect of MCTs would be gone at some point.
If you want to lose weight, you should, therefore, make sure that you do not drink more than 60 ml (1/4 cup) of coconut milk daily.
If you also want to use coconut oil, then you should completely replace your previously used frying oil with coconut oil. However, to lose weight, do not use more than 30 ml (1/4 cup) of coconut oil daily. If you do so, you can lose weight slowly and healthily.

One of the medium-chain fatty acids is the so-called lauric acid. The coconut oil in coconut milk even consists of about 50 to 55 percent of this fatty acid. Lauric acid has an extremely helpful ability to inhibit germ growth.
As a result, foods (e.g. spreads, sweets) prepared with coconut oil last longer than the same meals prepared with other fats. Coconut oil remains fresh at room temperature (i.e. unchilled) for up to a year.
However, lauric acid not only has an antibacterial effect on meals but also in the body when coconut milk or coconut oil is eaten.
For this purpose, lauric acid penetrates the cell wall of pathogens (bacteria, fungi, viruses) and thus leads to their death. In this way, lauric acid is even said to be able to destroy herpes viruses, flu viruses, and candida fungi.

The antibacterial lauric acid in coconut milk is also an effective substance against the bacterium that is commonly blamed for acne, namely Propionibacterium acnes. Lauric acid survives digestion, enters the bloodstream, and is attracted by the sebum that is produced in the pores of the skin.

The acid dissolves in the sebum and can thus slow down the growth of acne bacteria directly on the spot, thus reducing the excessive sebum production.

Coconut milk instead of cow's milk

While cow's milk and the cream made from it has developed over the last decades more and more into a frequently processed industrial product from a not exactly animal-friendly factory farming, coconut milk - if bought in high quality - is still the unadulterated natural product that serves as a staple food for many peoples of tropical countries and islands.

Diluted coconut milk is a nutrient-rich and tasty substitute for cow's milk. It perfectly complements the taste of pineapple, peach, mango, and many other fruits and can, therefore, be used to prepare fruit smoothies or desserts.

There are also countless recipes for soups, sauces, and vegetable and meat dishes from Asian cuisine that would not be complete without coconut milk.

It's all about quality

As with almost all foods, there are also serious quality differences in coconut milk. In any case, make sure you use organic quality, as the coconuts for your coconut milk are then cultivated without chemicals and inorganic mixed cultures.
Organic coconut milk usually also has higher coconut content, is, therefore, more viscous and therefore more productive. Organic coconut milk is also bottled without any additives, so it contains no preservatives or thickeners.
Once opened, a can of coconut milk is best filled into a sealable glass container and can then be kept in the refrigerator for up to four days.
It is much easier to handle and dose organic coconut milk powder. Just put 2 to 3 measuring spoons of it into a glass of water, stir and enjoy a wonderful low-fat coconut drink.
Because the coconut milk powder contains a very special fiber, the so-called acacia fiber, a drink made from coconut milk powder not only has all the advantages of coconut milk, but also the advantages of acacia fiber.
The acacia fiber is the freshly tapped and then dried milk from African acacia trees. This fiber is extraordinarily rich in soluble fibers. It has a very gentle and calming effect on intestinal health, but at the same time stimulates intestinal peristalsis.
Only after a few days does the effect show itself in easy and unproblematic digestion. Even in cases of inflammatory bowel diseases, positive experiences with acacia fiber have been reported, as it not only leads to an increase in beneficial intestinal bacteria but also appears to have anti-inflammatory effects on the intestinal mucosa. Only one glass of such a coconut drink made from 3 spoonfuls of coconut milk powder provides you with 20 percent of your daily fiber requirement

Since coconut milk consists of coconut flesh and water alone, this Gluten-Free Coconut Milk will taste like you are sipping liquid from a coconut itself. Its tropical flavor can be and is enjoyed all on its own, or it can add a slightly sweet taste to any drinks or foods it is mixed with. Oftentimes, it is used to make sweet curries that are less spicy than other types of curry. 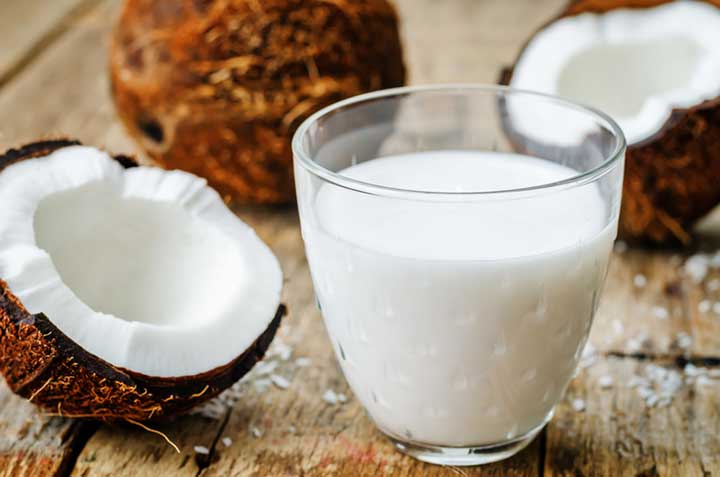 How do you cook with coconut milk?

Cooking with coconut milk is as simple as adding it to whatever you are making. If you want to cook with the milk to enjoy its sweet flavor without thickening up your soups, stews, and sauces, you can boil the coconut milk in water. This will help to break down its creamy texture, leaving behind only the sweet taste of the milk without its thickness.

Are there any health benefits to coconut milk?

Coconut milk contains fewer bad fats than a lot of other ingredients you cook with, while at the same time, it provides the body with the healthy fats it needs to balance out the cholesterol levels in the body.