The story of Cockta is very interesting. At the beginning of the 1950s, Emerik Zelinka, the father of the Cockta, created a refreshing drink from the best natural ingredients at Slovenijavino. It also contains rose hips, pleasantly acidic vitamin C, various herbs, pure spring water and caramelized sugar. The first carbonated refreshment drink is produced in Yugoslavia. The name "Cockta" derives Zelinka from "Cocktail", which means a mixture of different ingredients. On March 8, 1953, Cockta is presented for the first time in Planica. The visitors are accompanied at every step by the advertising poster with the sympathetic, cockta drinking girl. The poster was a work of the designer and painter Uroš Vagaja. Cockta is presented to the public as a round four-liter bottle with brown, frothy liquid and represents the western lifestyle. Both the bottle and the bottle label were designed by the designer Sergej Pavlin. In the same year, the first million-liter cockta is produced, filling a total of 4.5 million bottles. 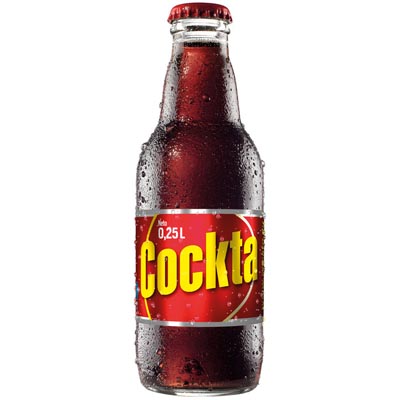