The history of chocolate begins in South America. This is where the origin of wild cacao is believed to be. New research in the highlands of Ecuador shows that cacao has been used here for about 5500 years. The highlands of Ecuador are therefore the starting point for the early trade up to the Pacific coast as well as for the spread of the use of cacao to the north.

In Central America, the cacao tree was already known almost 4000 years ago. While in South America mainly the pulp was used, pure or in fermented form as an alcoholic beverage, in Central America, however, both the pulp and the bean were used. The history of chocolate leads from Ecuador to present-day Mexico.

Cocoa among the Olmecs in Mexico

The Olmecs were the first known advanced civilization in what is now Mexico. Their heyday was from 1500 to 400 BC. This culture is best known for its colossal stone heads, which presumably represent rulers. Hardly anything has survived from this culture. Finds from the settlement areas, however, prove that the Olmecs prepared a cacao drink as early as 1800 to 1000 BC. The word "cacao" was also probably already in use at that time. The Mixe-Zoque language family, which is still spoken in southern Mexico, indicates that the original form of the language family was used by the Olmecs. In it, there is the word "kakawa" which survived the transformation of the languages and became "cacao".

The Maya decorated vessels with inscriptions and ornaments, marking the use of the cacao drink. These precious drinking vessels were usually elaborately painted and the inscription of the maker included his name, a dedication to a god or person, the client as well as the shape and content of the vessel. Therefore, it is known that high-walled, narrow drinking vessels were mainly used for the cocoa drink. In one vessel, inscribed with the glyph "kakaw", archaeologists found a dark coating on the inside. Analysis revealed that this contained theobromine, an ingredient in cacao, which was a strong indication that the powder was the remains of a cacao drink. This cocoa was produced between 460 and 480 AD. Another milestone in the history of chocolate. 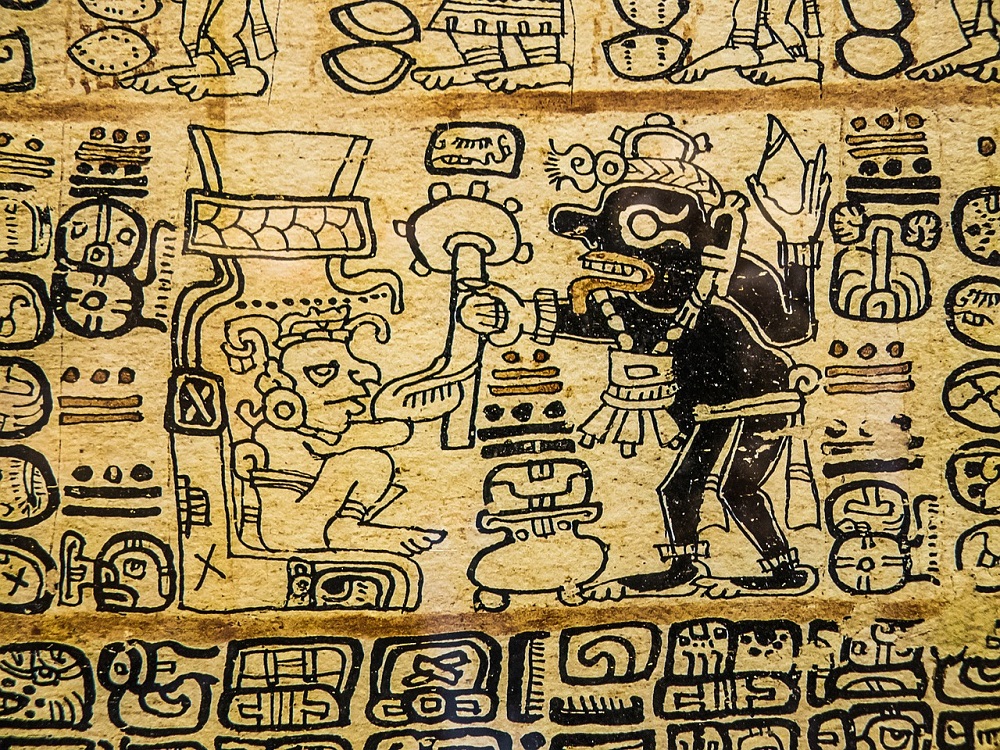 The Maya cultivated the cacao tree, growing it in large fields and developing irrigation systems to obtain the highest yielding crops. Through trade routes, cacao could be transported from the few suitable growing areas throughout the Mayan empire and later to the Aztecs. There were different recipes and ingredients and cacao was also used as a porridge or spice. Diego De Landa, bishop of Yucatán and Maya explorer of the 16th century, wrote: "From corn and ground cacao they make a syrup that is very tasty and with which they celebrate their feasts; from the cacao they extract a fat that looks like butter, and from this and corn they make another tasty and appreciated potion." There was also, as in South America, an intoxicating variant of the cocoa drink through the fermentation of the pulp.

The cacao drink was used by the Maya, among others, as a kind of holy water to celebrate the adolescent's transition into adulthood. In addition to copal and humans, cacao was also offered as a sacrifice to the gods. Both cacao and drinking vessels were included as grave offerings. As a medicinal plant, cacao was a panacea among the Maya, used for diarrhea, measles or birth pains. Cocoa butter, on the other hand, thanks to its disinfectant properties, was applied to inflammations, dandruff and animal bites or used as a general skin care. The cocoa bean was also used as a means of exchange and payment or for tribute payments.

At the beginning of the 13th century, the advanced civilization of the Aztecs began, who built their capital at that time where Mexico City is today. As with the Maya, cacao was considered valuable and used only by the upper classes of society. Tribute payments from subordinate provinces in particular were made to the capital in cacao beans and drinking vessels. The trade routes on which the cacao was transported to the Mexican plateau were specially guarded. Conquest campaigns to the Pacific coast guaranteed the cultivation areas within the borders of the Aztec empire.

Since cacao beans were also a means of payment, their warehouses were closely guarded. Scales were not yet known at that time, and so a commodity value was paid for with a certain number of beans. For example, a turkey cost 200 cocoa beans, a hare 100 cocoa beans and an avocado between one and three cocoa beans. The daily wage of a porter at the time of the conquest of the capital in 1521 was also equivalent to 100 cacao beans.

The Aztecs turned the history of cacao into a history of chocolate. They called both the cacao and the cacao drink "cacahuatl." Scientists assume that the preparation corresponds to that of the Mayan culture, but the drink was primarily drunk cold. The Aztecs used cacao and cacao butter as a remedy, as a gift and as an offering.

The first European to learn about cocoa beans was Christopher Columbus in 1502, when he encountered a Mayan merchant ship on his fourth voyage to the Americas: "Their ship was loaded with many kinds of goods, colorful fabrics made of cotton, utensils and weapons made of copper, clay vessels, and they also carried a kind of almond." These almonds were cocoa beans. But it was not until the conquistador Hernán Cortés that the cacao drink was consumed. This bitter drink did not appeal to the European taste.

The first documented evidence that cacao landed in Europe dates back to 1544, when the Dominican friar Bartolomé de Las Casas brought a jar of chocolate to Prince Philip of Spain on his journey from Guatemala to Spain.

The chocolate is ennobled 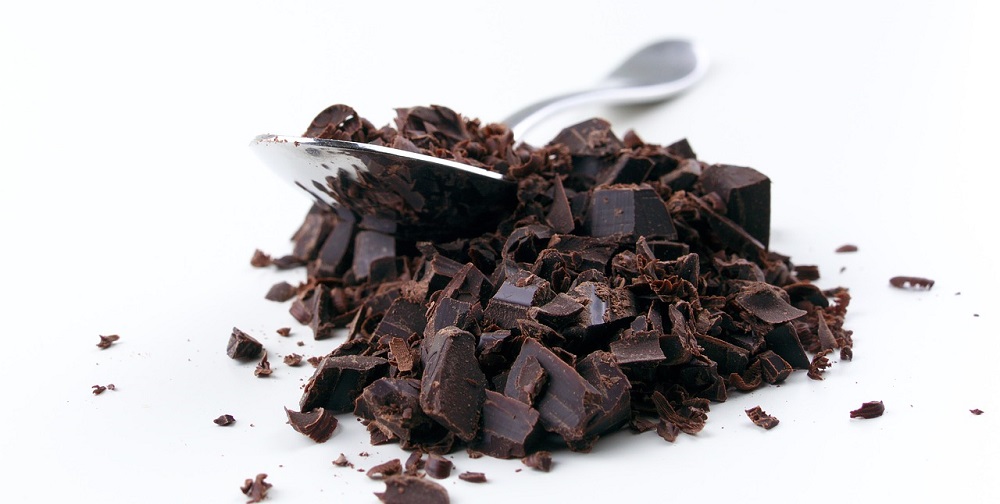 Toward the end of the 16th century, cocoa experienced growing popularity. Hot drinks were something exotic and unusual in Europe at that time. In the course of time, the word of the drink also changed and became "chocolatl" and later "chocolate". The cocoa drink was already widespread among the Spanish settlers in Mesoamerica when it found its way to Europe in the 16th century, and by the 17th century it was firmly established within the European aristocracy of the Old World. Regular cocoa shipments in the 1700s and the dissolution of the Spanish cocoa monopoly through cultivation in other European colonies spread cocoa from Spain to the aristocratic classes of other European countries. Cocoa was also used as a medicine in Europe, as it was in Mesoamerica, especially as a general tonic. The European nobility celebrated the drinking of chocolate by adding sugar and well-known spices such as cinnamon and anise, especially in family circles. In addition, various vessels and services developed specifically for the consumption of the cocoa drink. These vessels make it easier for us today to trace the spread and history of chocolate.

Due to the enormous demand in Europe, there were shortages in the supply of cocoa. Wars of conquest, forced labor and the introduction of diseases decimated the indigenous population of Mesoamerica enormously. Among other things, this led to a loss of labor. To compensate for this decimation, the Spanish conquistadors brought between 15 and 20 million slaves from West Africa to the Americas within 350 years to work on the (cocoa) plantations. This did not fall under the papal ban on slave labor of 1537, as it only affected the Native American population.
Finished goods such as weapons and tools were shipped to West Africa via the Atlantic Triangular Trade. They were exchanged for human slaves, who in turn would work on the sugar, cocoa, indigo, and tobacco plantations in the Americas. The proceeds of these harvests were sold in the mother country (Spain, Portugal, France, Holland, Germany, England, Denmark) at high profits. Through the further conquest of America, cocoa from the territories of Mexico, Guatemala, Brazil, Venezuela and Ecuador also reached the present-day states of French Guiana, Suriname and the Caribbean Islands; from the first half of the 19th century also the colonies in West Africa and Asia. Thus, the history of chocolate is also a part of European colonialism and the exploitation of local populations and resources.

From the middle of the 18th century, the chocolate drink slowly found its way into the upper middle classes.The consumption or trade of cocoa became taxable, state-controlled and licensed.Nevertheless, various coffee houses and chocolate parlors opened, which became central meeting places and places of exchange. Until the 19th century, the production of the chocolate drink changed only slightly. Gradually, various mill designs were developed to simplify the labor-intensive and strenuous work of chocolate production.

In 1819, the French chocolate maker Pelletier and the English company Joseph Fry used the first steam engine in chocolate production. From then on, the history of chocolate is inextricably linked to the achievements of industrialization (see box).

At that time, chocolate was mainly sold by pharmacies as a medicine, by confectioners, liqueur makers and confectioners.

During this period, the development of chocolate production was rapid:

In the second half of the 19th century, chocolate manufacturers carried a wide range of chocolates that could be divided into four categories: Plain chocolate consisted of cocoa and sugar and was rather difficult to digest. The flavored chocolate had additives such as vanilla, cinnamon or amber. The starchy chocolate was mixed with sago, for example, and served to strengthen the body. Medicinal-pharmaceutical chocolate contained medicinal substances, such as Irish moss, iron or mercury against sore throat, anemia or syphilis, and was sold mainly in pharmacies. From now on, the history of chocolate became a history of diverse products that can be made from cocoa.

With the founding of the Association of German Chocolate Manufacturers in 1877, the participating chocolate manufacturers committed themselves to the purity of chocolate and printed the statement "Guaranteed pure cocoa and sugar" on their packaging. This became necessary because until then some producers had tried to stretch the expensive cocoa with other, cheaper raw materials, from various types of flour to potato starch to chalk and earth.

The modern history of chocolate begins during World War II. The German chocolate industry produced almost exclusively for the army. Cocoa as emergency rations and tonics was carried constantly. SCHO-KA-KOLA, a mixture of cocoa, coffee and kola nut, which is still sold today, was created only for this purpose.

From the 1960s, chocolate developed further: now bars were also offered. The main target group was children. Advertising has since been geared toward children and mothers, and so the Milka cow and the Ü-Ei, the so-called surprise egg with arms and legs, are the best-known advertising figures in the German-speaking chocolate industry.

The diversity of chocolate companies that emerged continued to diminish as global pricing power in the competitive chocolate market increased. For example, the Stollwerck company was bought by Hans Imhoff in the 1970s and in turn incorporated into the Swiss company BarryCallebaut in 2002. Rationalizations led to the Stollwerck factory in Cologne, for example, having to close after 160 years of chocolate history.
Today, the global chocolate market is dominated by only a few large international companies, although it can be assumed that 40 to 50 million people depend on cocoa cultivation itself.
are dependent on cocoa cultivation.

Currently, chocolate bars in particular continue to be the number one seller in Germany.
Experimental flavors as well as plantation and fine chocolates are on the rise. But chocolates in organic quality or from fair trade are also continuing to grow on supermarket shelves.  Consumers have become more sensitive as a result of various "scandals" and campaigns by non-governmental organizations. In addition, the cosmetics industry is making use of the positive effects and ingredients of cocoa beans. Especially the cocoa butter and mass can be found in creams, soaps, body lotions and masks.