We dedicate this blog post to rum: What exactly is rum? What differences arise from the production within the segment? How does white rum differ from brown rum?

Where you can buy Rum

Visit our food Index database and search for the rum of your choice. We have plenty of sellers listed.

Rum is a spirit with a minimum of 37.5% by volume, while the tropical climate of the Caribbean favors the production of rum.

This distinction is important because rhum agricole is a protected designation of origin and is declared as a quality characteristic in some places. Rhum agricole is made from freshly pressed sugar cane juice and comes exclusively from French overseas departments such as Martinique and Guadeloupe.

Whether rum traditionnel or rhum agricole, the further process in the production is similar and shows some parallels to the production of whisky. Both spirits go through similar production steps and differ primarily in the choice of raw materials and the minimum maturation period.

The three main stages through which a rum passes are the fermentation of the raw materials, the subsequent distillation and the final maturation.

Fermentation of the raw materials

Let's start with the fermentation. The choice of raw materials is the first decision in the production process: there is a choice between molasses, a black sugar syrup that is a byproduct of sugar extraction, or freshly pressed sugar cane juice.

The addition of water and yeast gives the starting signal for fermentation. Fermentation lasts between 24 and 72 hours and is carried out in the absence of air. After that, the mass has an alcohol content of about 3-6% vol. from where it can be further processed.

In 97% of cases, the molasses is chosen and a traditional rum is obtained. This is mainly produced in the Caribbean. However, if the rum is based on sugar cane juice, you get a "rhum agricole", as it is often produced on the French islands.

Distillation also breaks down into two options. On the one hand, there is pot still distillation. It takes place in copper stills, which produce mainly aromatic to heavy distillates, while still having a soft mouthfeel. This process is discontinuous and is operated manually.

It is often said that these are the "better rums" because they focus on quality rather than quantity. In any case, it is the more elaborate method. This is because the work is done by hand and the contact between man and spirit is definitely a decisive factor in rum production.

Column still, on the other hand, offers the alternative of distilling distillates that are as mild, soft and neutral as possible. The so-called distillation column offers a very clean distillation due to its height and the integrated distillation trays inside. The distillation process is continuous, so large quantities can be distilled very efficiently.

In addition to distillation, maturation/storage is the heart of rum production. 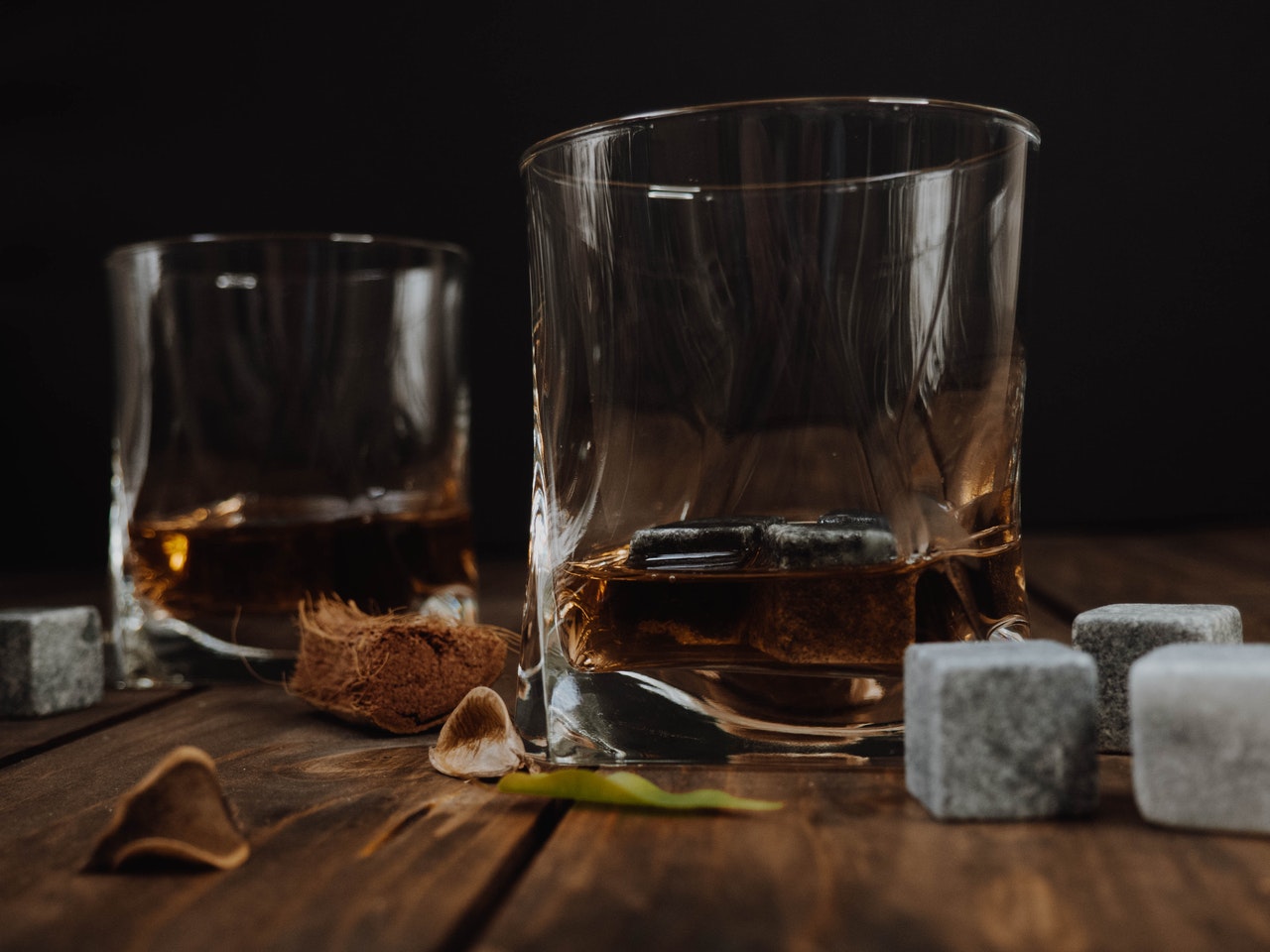 This is where the wheat is separated from the chaff, and each distillery has its own individual methods for getting the best out of its distillates. A distinction is made between storage in steel tanks and aging in different barrels for different periods of time.

Steel barrels take very little influence on the spirit and accordingly house rum only for a short time. The steel barrel serves primarily to provide space for the rum to settle and harmonize.

Wooden barrels, on the other hand, are more interesting and the choice is much more varied. Wooden barrels can be, for example, former bourbon, whisky, cognac or Bordeaux barrels. These are mainly made of American oak and are usually toasted before being used again, which allows the wood to interact intensively with the distillate later on. Please read our article on barrel storage if you would like to know more.

Rum in particular has a very high degree of evaporation, which can also be explained by the tropical climate. The so-called "Angel's Share" is correspondingly high with rum and amounts to approx. 10-13% per year. In the case of Scotch whisky, on the other hand, it is only about 1-3%. The annual loss in rum production is correspondingly high with a very long storage time and lets the price of a long-matured rum rise justifiably.

There are also differences in the area of barrel storage. For example, the Single Cask is distinguished from Solera process.

While somewhat nonsensical, for simplicity's sake, the first classification of rum is often based on color into brown and white rum. However, the visual impression can be misleading, as the color can be subsequently altered by manufacturers or bottlers using sugar couleur and activated charcoal filters. White rum can be given an attractive brown color using sugar couleur, and brown rum can have its color removed again using various filtering methods such as activated charcoal filters.

You see: The color alone does not provide reliable information about quality and maturation time.

It is better to divide rums into aged or unaged or short-aged rums!

White rum appears as a clear and colorless spirit. If the rum is an unaged white rum, unlike aged rum, it is not aged in wooden barrels after distillation but stored in steel tanks. Storage lasts an average of three to 30 months. The aim is to store the rum for a short period, so that the "Angel's Share" is not too significant. During this time, the rum harmonizes. Residual fusel oils evaporate and the result is a white rum that is far more harmonious and balanced than the fresh, undrinkable distillate.

We recommend unaged rum mainly for mixing cocktails or long drinks. Less it is to recommend to connoisseurs who want to drink rum pure.

But beware! Depending on the mood of the manufacturer, the color may be spiced up by means of sugar couleur. These rums then present themselves in an appealing golden to black coloring. However, this only pretends that the rum is extensively matured in wooden barrels, whereby we automatically have the transition to the matured rum...

In this category, we often encounter higher quality rums, because they are more elaborate in their production. These are created by a finely tuned relationship between storage time, wooden barrel and climate. In traditional distilleries, they are subject to the supervision of specially trained "Maestros Roneros", who are the counterpart of the "Master Distiller".

Thus, if the color of the rum is not helped up by means of sugar couleur, it results from the intensive and long-lasting exchange between wood and distillate. The color can take on a yellow, amber, copper, bronze or mahogany tone. The longer the aging time in the barrel, the darker the color. Brown rum is stored for at least three years. High-quality rums, on the other hand, linger in wooden barrels for up to 40 years. The high price is explained, among other things, by the high "Angels's Share", which is up to 13% annually.

Maturation in the wooden barrel gives the rum its individual character. The aging process is interactive, which means that there is an exchange between the wood and the spirit. Unwanted aromas, caused by fusel oils, are broken down. On the other hand, the alcohol interacts with the wood and releases fine aromas of vanilla and caramel, for example. This interaction is in a delicate balance and is subject to various factors such as ambient temperature, climate, barrel type, wood and the nature of the initial distillate. This allows an endless bandwidth of nuance differences in taste, color and bouquet.

Brown rum can taste sweet or spicy, mild or spicy flavor and lead notes of chocolate, vanilla, nougat, nuts or exotic fruits. Likewise, orange, cedar, tobacco, oak can be represented in taste, as well as pepper, raisins, molasses, butterscotch, to name just a small selection. How heavy and aromatic or intense tasting a matured rum is, determines the amount of ester in the rum.

As you can see, a diverse world is open to the connoisseur and explorer. Rum can be spicy or fruity, mild or powerful. The finished distillate can appear as different as the countries of origin. So it's worth trying out to discover your personal favorites. If you're searching for a similar contribution on Whisky, read this contribution.