In Thailand there are over 10 different varieties of eggplant. Among others, the purple variety we know; a variety that looks like peas and again another that is as big as a ping pong ball. These eggplants are mostly yellow, green or almost white and are usually divided or quartered for cooking. Furthermore, there are orange-red and even green and white marbled eggplants. As the variety of colors, so is the shape. There is the berry fruit cucumber-shaped, elongated, spherical, club-shaped, teardrop-shaped and snake-shaped with up to one meter in length or egg-shaped.

Unlike the purple variety known here, the smaller Asian varieties do not need to be sprinkled with salt and left for 20 minutes before cooking to extract the bitter juice from the vegetable. The Asian smaller varieties can be used immediately, complete with peel. 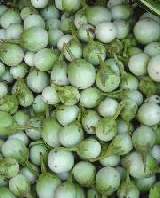 Eggplants are popular for curry dishes or soups. Some varieties are even eaten raw together with a dip.

Bamboo is used in many ways in its native country. Furniture, chopsticks, scaffolding, even bridges are built with the sturdy bamboo stalks. The fresh shoots of the bamboo plant, on the other hand, are an indispensable part of any Asian cooking pot. 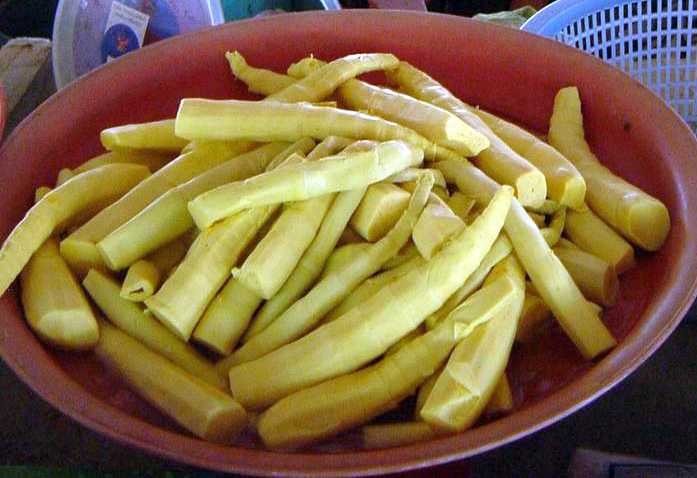 The sprouts are harvested in a similar way to the asparagus we know. You have to poke the shoots, which grow up to 30 cm long, out of the ground. The fresh shoots are covered by a layer of leaves, which must be removed before eating the shoots. The shoots freed from the leaves have a step-like structure. For consumption, bamboo shoots are either pickled, or cut into pieces and cooked. It is essential to cook bamboo shoots before eating them, as they contain toxic prussic acid when raw. This is only rendered harmless by cooking.

In this country, they are available in various forms in cans.

The baby corn is the delicate small version of the corn on the cob. This is increasingly finding its way into German kitchens, but here mostly only as a garnish. Thai dishes use these corn cobs mainly in stir-fry dishes in combination with meat or other mixed vegetables.

Baby corn can be bought fresh in Asia stores or well-stocked supermarkets. Or in cans. For cooking, make sure that the baby corn is soaked in water. 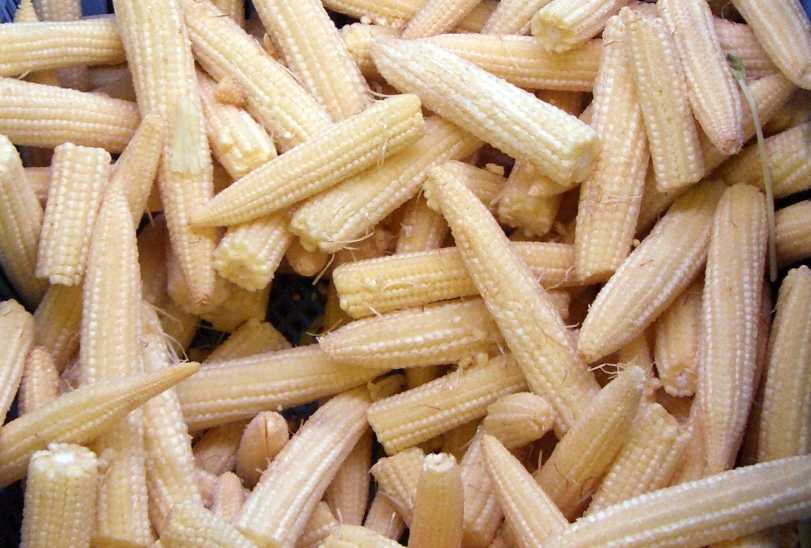 Cashews have a delicate, mild and creamy flavor and can be eaten natural, roasted or salted.

In Thailand there are many wok dishes with cashews, e.g. chicken with cashews. They can also be served as a snack, roasted in a pan with a little chili.

The cashew nut originates from South and Central America, from the region between Brazil and Mexico. Today, cultivation areas are mainly India and Southeast Asia.

The nuts grow individually at the end of the so-called cashew apples. The classic kidney-shaped cashew nuts are almost exclusively sold shelled. This is because the kernels are surrounded by a seed coat, the contents of which contain an oil that can cause allergic reactions. They are therefore quite expensive, as harvesting is laborious.

An estimated 100,000 different types of mushrooms exist worldwide, but only a few hundred are edible. Mushrooms are the most cultivated type of mushroom. They have a light brown, slightly scaly cap. The flesh of cultivated mushrooms has a pleasant slightly almond-like aroma to wild mushrooms.

Chinese cabbage, often called Peking cabbage, is excellent for delicious Thai dishes. It is good for both stir-fry dishes and soups. It originates from China, is rich in vitamins and low in calories. For a typical stir-fry dish, you can make good use of a smaller Chinese cabbage. If you have leftovers, you can make a salad out of it or even store the rest in the refrigerator for a few days.

In Thailand, Chinese cabbage is one of the most important ingredients in cooked noodle soups. Together with broth and rice noodles it tastes excellent.

Chinese cabbage is also suitable for stir-frying. Unlike most other types of cabbage, it cooks very quickly and can be cooked in a wok with other vegetables. Another advantage: Chinese cabbage is particularly digestible and digestive.

The peanut, also known as the ashanti nut or earth bean, is actually a legume. Today, the world's main producers are mainly India, China and Africa.

In Thai cuisine, the nuts are often used unseasoned. In Asia stores there are shelled unseasoned peanuts. In Satee sauces (peanut sauce) as the main ingredient, in the national dish Pad Thai as an ingredient. The oil of the nut is also excellent for cooking in a wok.

In Thai cuisine, spring onions are very often used. They are usually added to stir-fried wok dishes in small pieces and stir-fried very briefly together with the dish. They add a delicious flavor to the dish and the fresh green is also pleasing to the eye.

Spring onions can be easily frozen in small pieces and simply added to the stir-fry dish when frozen.

Asian scallions are usually smaller than those available in this country, but you can use the European scallions, or also called spring onions, just fine.

The home of garlic is in southwest Asia. Growing areas can be found wherever a dry and sunny climate prevails. Garlic is mostly used as a vegetable or as a spice. In Thailand, you can see whole sacks full of garlic cloves in the markets. In cookshops, there is sometimes a container of chopped garlic cloves for seasoning or nibbling in small containers on the tables.

Water spinach is very well known as "Morning Glory" in Thailand and all over Asia. It is often found on restaurant menus as a separate vegetable dish. This is not least because the vegetable with its crisp stems and soft leaves is a delicious ingredient. The leaves are served either boiled in soups or steamed. In Vietnam, water spinach is even a kind of "national vegetable". 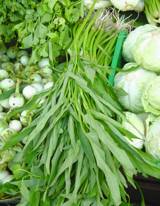 Morels are often also called Mu-Err or cloud ear mushroom. They have this name because of their ear-shaped appearance. The morels are a color-giving element in many Asian dishes and have a slight bite.

Morels are only available dried in our country. Before preparation, they must be soaked in warm water for at least 30 minutes until they swell. Only the caps are used, the hard stems are not edible. When the morels are swollen they have a soft consistency and a neutral taste. 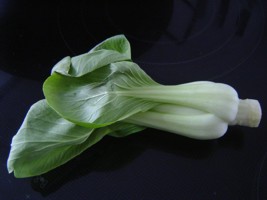 Shitake mushrooms are mostly available in us only in dried form. However, it is also available fresh and canned. The dried mushrooms must be soaked in warm or hot water before use. Only the large roundish caps are used, the stems are hard.

The tasty shitake is used as a garnish and to flavor soups and sauces.The cap is dark brown to black. The flesh whitish to grayish. Shitake mushrooms are also called Chinese mushrooms or tongu mushrooms. 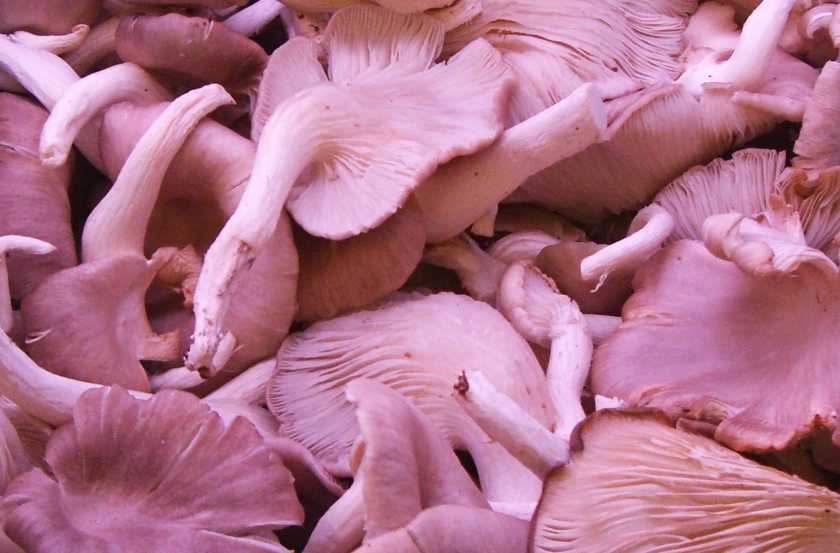 The sweet potato is also called earth artichoke, or horse potato. The root tubers of the sunflower-like plant, which probably originated in Central and South America, are edible. Today, in addition to the tropical countries, Europe is also one of the cultivation areas. The largest producer of the vegetable, however, is China, which accounts for more than a third of world production.

Behind the red to brown skin is a floury potato substance. The taste can be described as slightly sweet and is similar to the floury potatoes in our latitudes. Boiled, cooked or au gratin, these sweet tropical potatoes are prepared identically to normal potatoes. 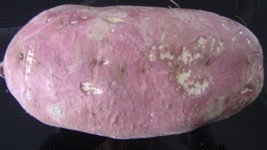 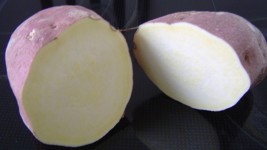 Soybean sprouts can be bought in every market in Thailand. Also with us these are offered fresh in the Asia store. These light beans are usually packed in transparent bags and can be found in the refrigerated section.

Soybean sprouts are also offered in cans, but here the taste is somewhat lost and is therefore not recommended. In the case of fresh produce, care should be taken to ensure that a noticeable resistance is felt when the bag is squeezed, then freshness is halfway guaranteed. 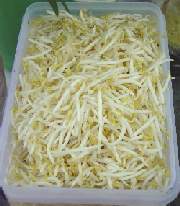 These mushrooms are similar to mushrooms. They are often used in Thailand, especially for the famous Tom Yam and Tom Khaa soup. In this country, unfortunately, they are available only in cans. 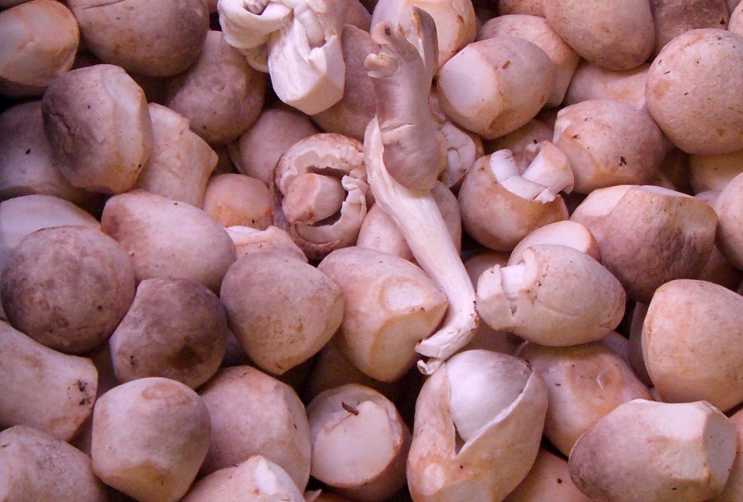 The tropics in West Africa, Madagascar, the Pacific Islands and East Asia are the home of the water chestnut. Because of the name similarity not to be confused with the chestnut growing on trees in this country, the water chestnut is cultivated in Asia in standing water.

Especially in China, but also in the rest of Asia, these "water fruits" are part of the culinary environment. The round, 2.5 to 4 cm large chestnuts taste sweet and are peeled like apples. They can be eaten raw, e.g. chopped in salads or wrapped in slices of ham. However, they are also very tasty when cooked. They can be found raw or unpeeled in the markets. In well-stocked Asian stores, they can be found in Germany in canned goods imported from China.

At least 80 different pea varieties are known. The following varieties are distinguished: shelling peas (slightly floury, not very sweet), marrow peas (sweet and tender) and sugar snap peas. Only the sugar pea can be eaten with the whole pod and the seeds inside.

The taste can be described as sweet and tender. This is due to the lack of parchment skin, which has not yet developed inside the shell. 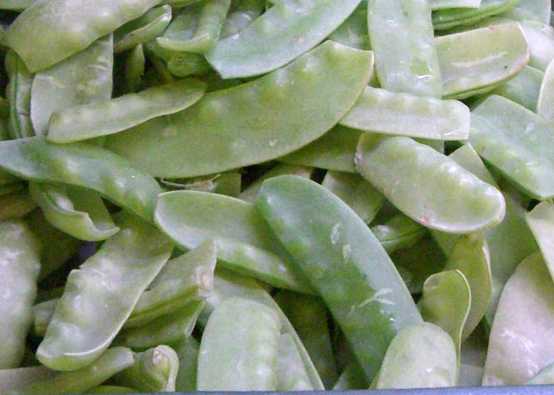