Thailand is not only a paradise in terms of beaches and islands! Thailand is also a true fruit paradise and offers a wide range of delicious tropical fruits. In this article we would like to introduce you to a few delicious fruits that you should try in Thailand. Some of them are universally popular, some are very controversial and rather a matter of taste. The best example of this is certainly the "stink fruit" durian. So here are a few delicious fruits in Thailand.

Mango is clearly one of the most popular and well-known fruits of Thailand. A ripe mango is incredibly sweet and juicy. It is so soft and tender that it almost melts in your mouth. The mango is also the main ingredient of the delicious dessert Mango Sticky Rice (Khao Niao Mamuang). Besides the fruit, you should definitely try a mango fruit shake in Thailand. It is definitely one of my personal favorite fruits. 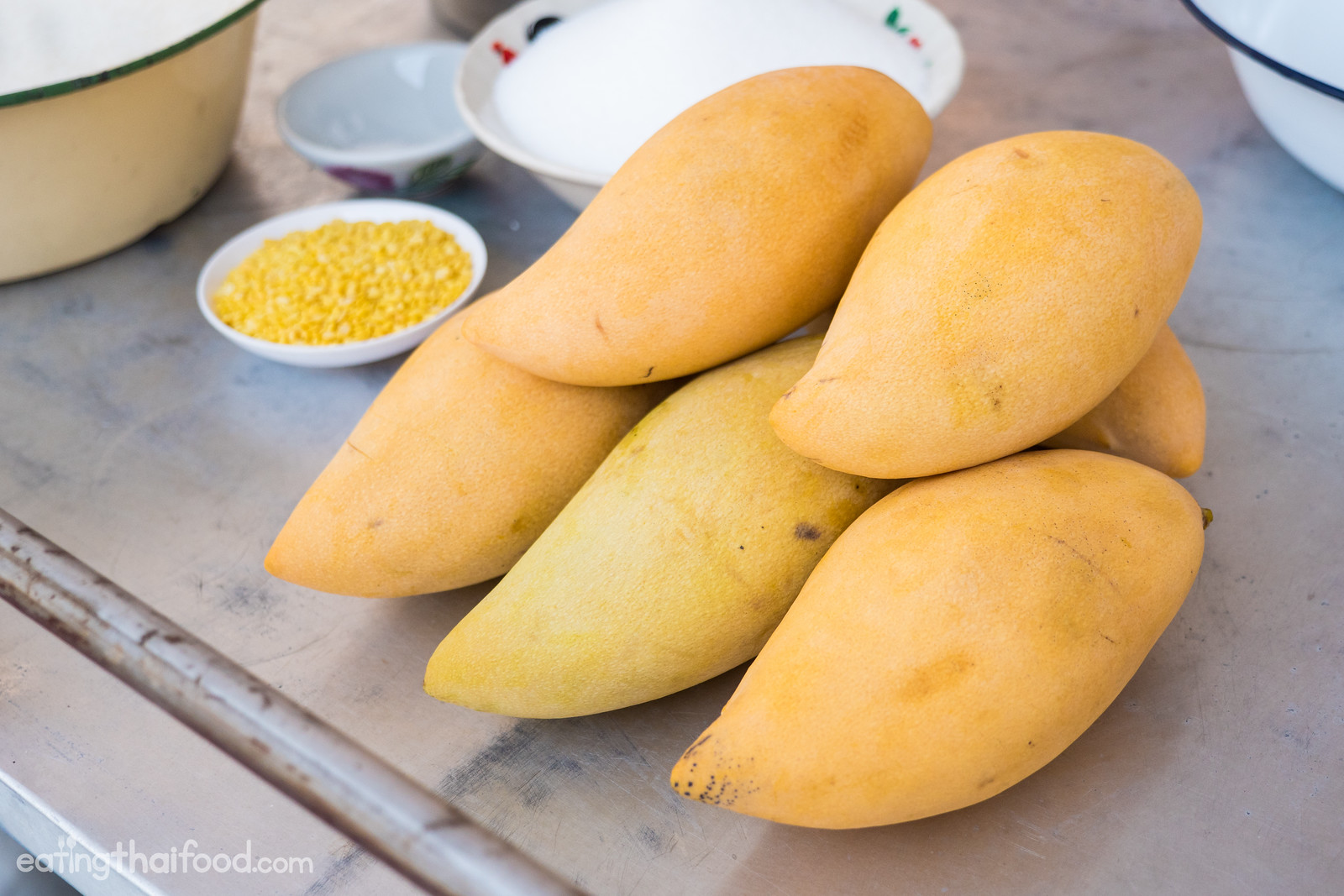 Also very popular among locals are unripe mangoes cut into strips. Together with a sauce or a chili-sugar dip, these snacks are very popular, as they combine many extreme tastes. The dominant flavor here is, of course, the sour taste of mango. Unripe mangoes are often still green on the outside, but this need not always be the case. Even a ripe and sweet Thai mango can still be green on the outside. 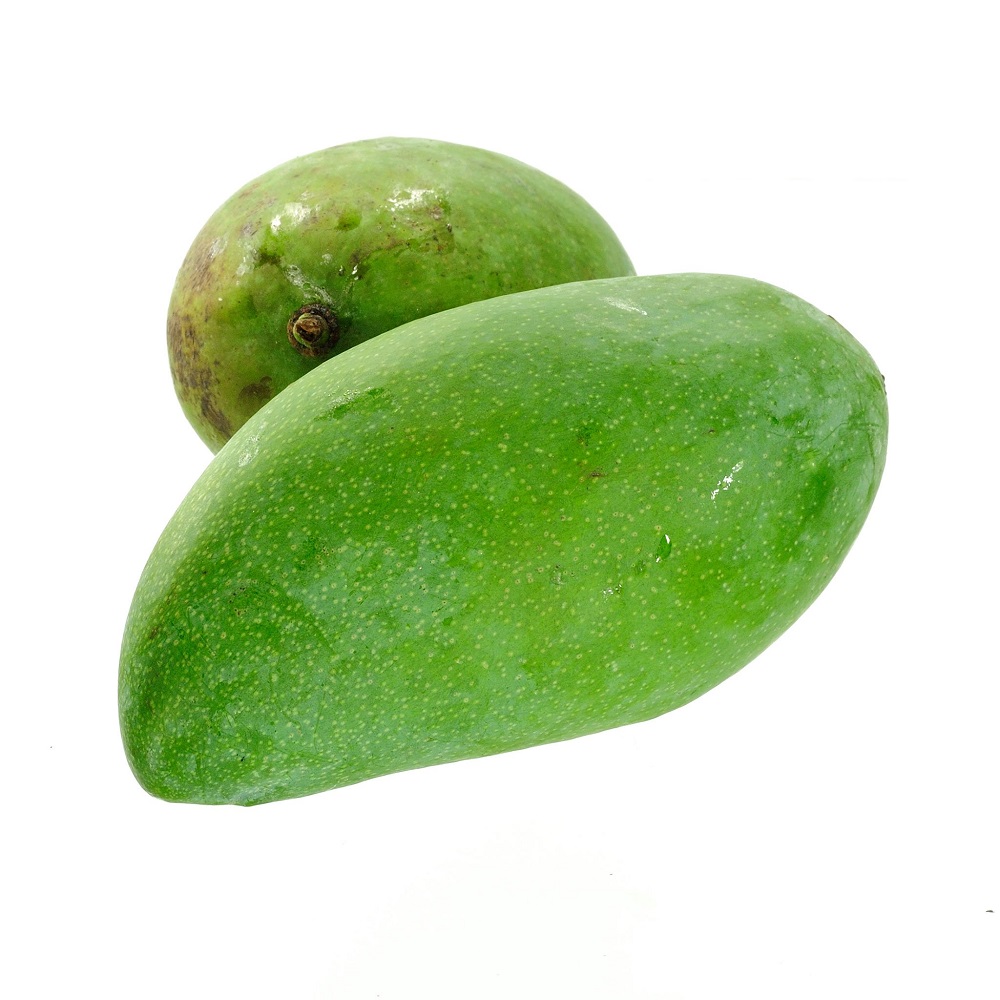 Everyone knows pineapple and in Thailand you can find it everywhere. Whether chopped from the street vendor, in salads, fruit shakes or even in curries (e.g. in some Gaeng Som variants) or other Thai dishes, such as Sweet and Sour. 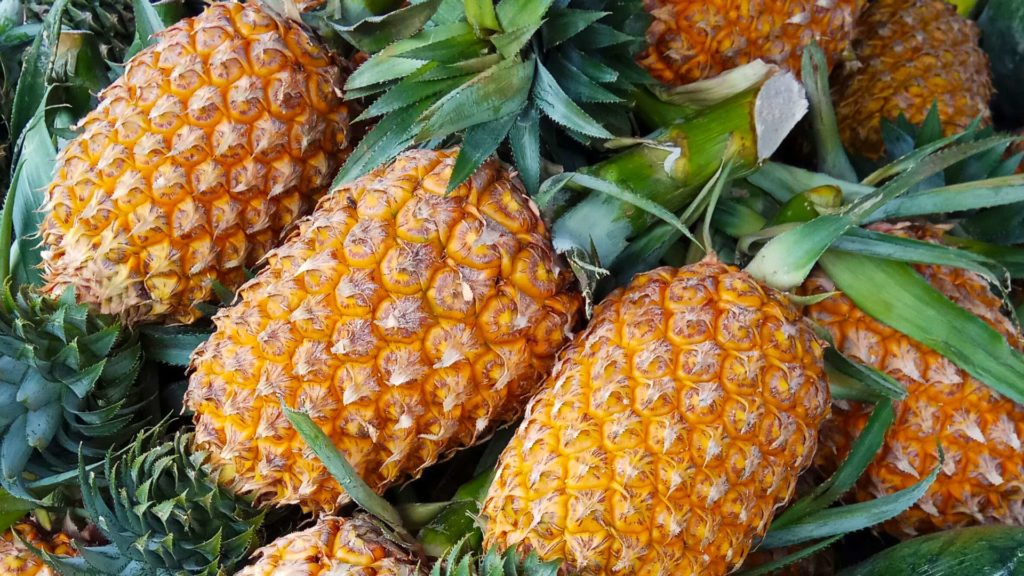 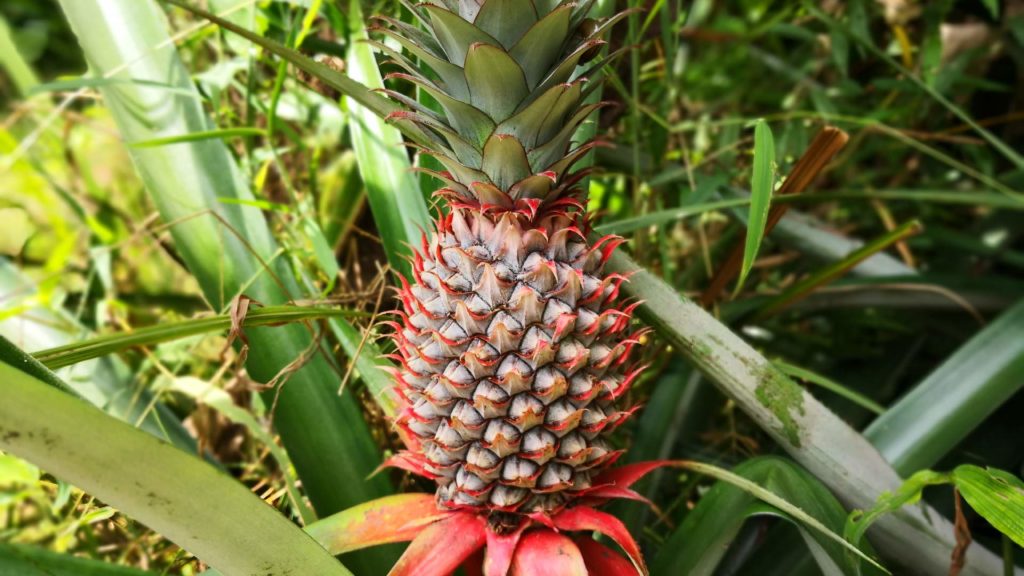 Of course, there are also watermelons in Thailand. Don't be surprised by the shape - often they have an elongated shape and are not completely round, as you might know from German supermarkets. Some varieties are even yellow on the inside, but taste at least as good as the red ones.

The papaya is probably one of the most popular fruits in Thailand - and not necessarily because the fruit is so beautifully soft, sweet and juicy. The papaya is the main ingredient of the ever-popular papaya salad (Som Tam). However, an unripe papaya is used, which is still slightly green inside instead of orange and also has a much harder consistency.

In any case, you should try a (ripe) papaya. They are very tasty and in the best case buttery and sweet. You can buy them in markets and supermarkets. Even the street fruit vendors offer papayas already cut into small pieces. 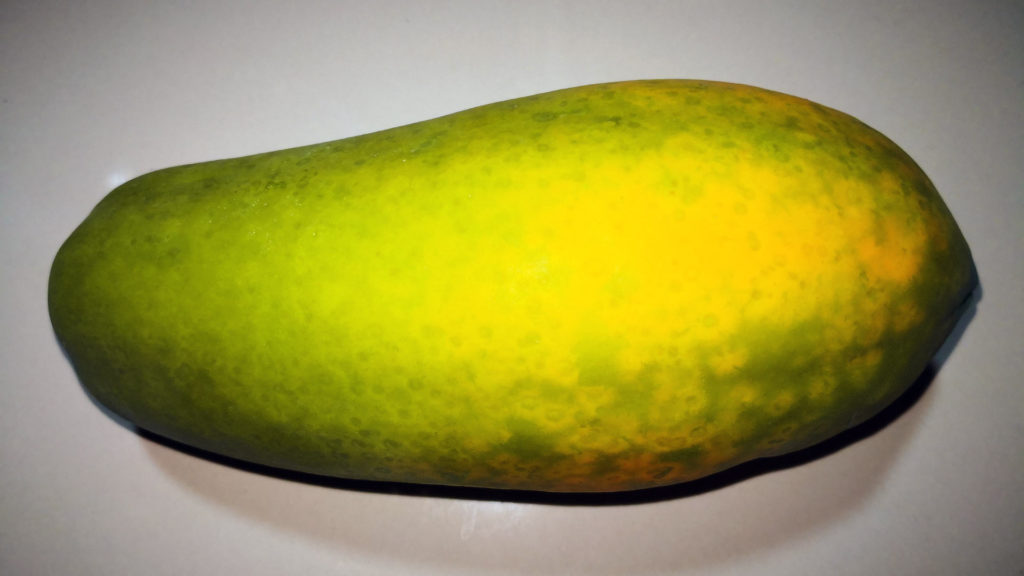 What would be a tropical country without coconuts? The coconut is a symbol of paradisiacal islands and beaches and of course also belongs in Thailand! Especially the south of the country is full of coconut forests as well as plantations and islands like Koh Samui or Koh Phangan are full of them.

Coconuts and their juice are healthy and provide important substances for the body. A whole coconut in Thailand usually costs between 20 and 40 baht, depending on location and quality. In restaurants you can expect even more. 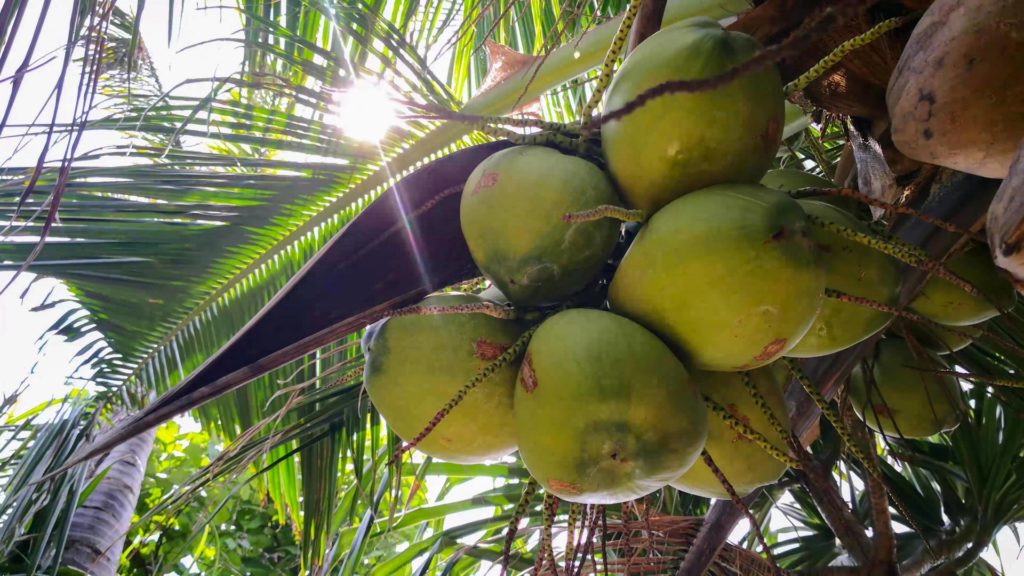 A very tasty, although not necessarily known type of coconut, is the roasted coconut (in Thai Maprau Pau genant). Here, as the name suggests, normal coconuts are burned or roasted and then processed again. How this looks like, you can see here on YouTube. The taste of the juice becomes even more intense. Also, the flesh is easy to separate from the shell, so you don't have to scrape it off like you would with a normal coconut. A little insider tip if you like coconuts! 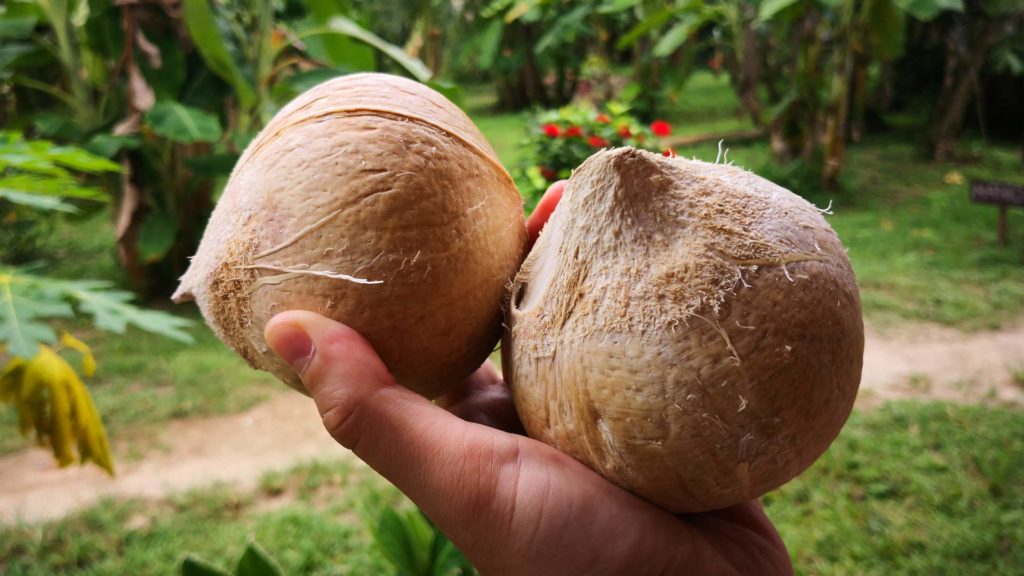 Everyone knows what a banana looks like. In Thailand, too, they basically don't look much different. With the difference that they are much smaller and it can also happen that there are still seeds in the fruit. In my opinion, they taste better and more natural than the "perfect" bananas available in German supermarkets. 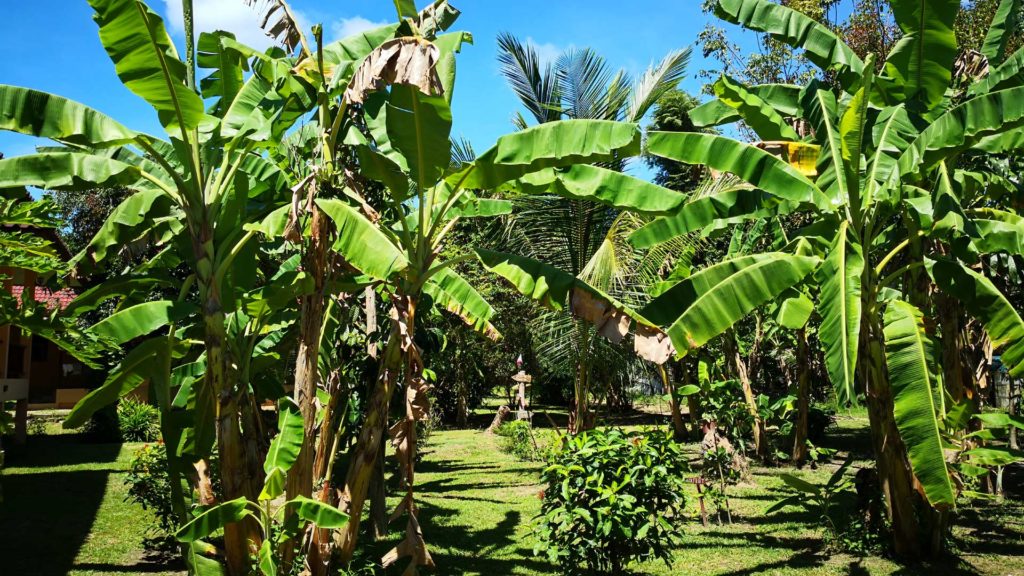 The "king of fruits", as durian is also often called. Durian is more than a fruit and Asians are crazy about it. It is one of the biggest fruits in the world. Durian is also probably the most expensive fruit you can get in Thailand.

The 2nd nickname of the durian, "stinky fruit", is not by chance. An opened (and especially ripe) durian has a very intense smell of its own. That's why it is often forbidden in hotel rooms or some public transport. 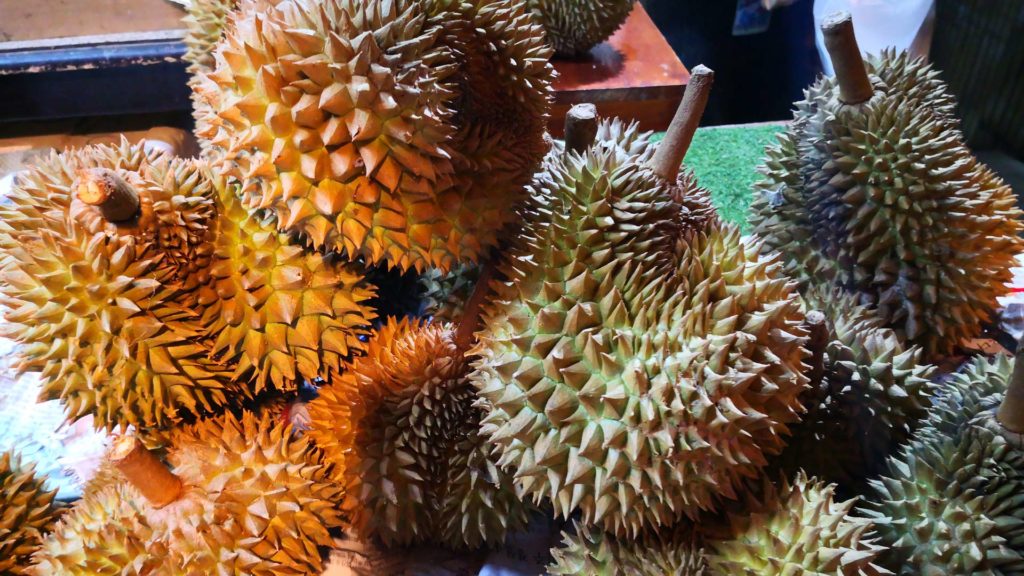 The taste of durian divides opinions. To describe it is very difficult and I would recommend everyone, despite the smell, just try it and find out for yourself. A good, ripe durian is extremely creamy and hardly has the consistency of a fruit. You'll think you're eating some sort of pudding right now. I personally love durian and could eat it every day. 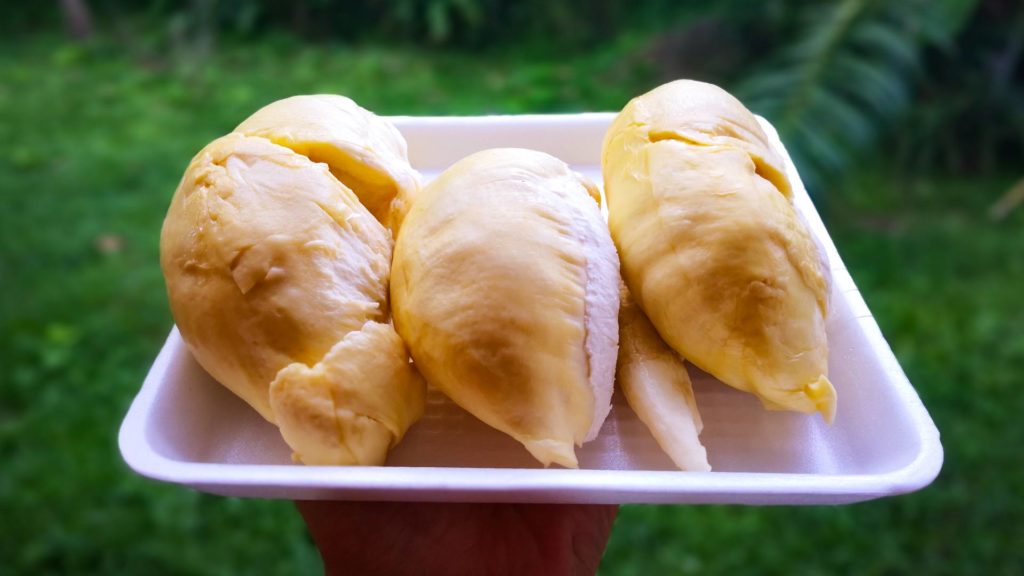 By the way, there are two types of durian in Thailand: chani and monthong. The Monthong is much better, but also more expensive. So the first time you should ideally try a durian monthong.

The jackfruit also has very large fruits, similar to a durian tree. When the outer shell is opened, inside lie quite a few small yellow fruits that are edible and in turn enclose a seed (the seeds, by the way, are also edible and, when cooked, make a tasty, nut-like snack. They are very reminiscent of chestnuts).

The taste of jackfruit is also difficult to describe. It is a mixture of something sweet, banana and pineapple - with a hint of vanilla. A very ripe jackfruit also has an intense smell of its own, but it is much more pleasant and "fruity" than that of a durian. A good, juicy and ripe jackfruit is one of my personal favorite fruits in Thailand. 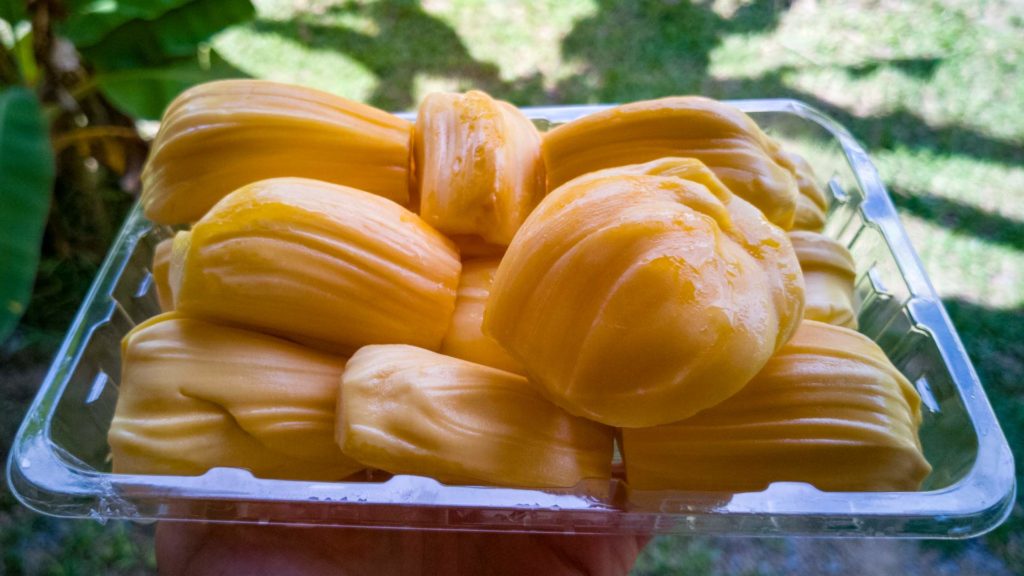 You have already met the king of fruits. Here comes the "queen of fruits". Mangosteen has nothing in common with mangoes, as you might guess from the name. The taste is not too sweet, but rather slightly sour. Still, very tasty and it's hard to stop eating them. By the way, mangosteen is said to lower the body temperature, so it is good for fever. 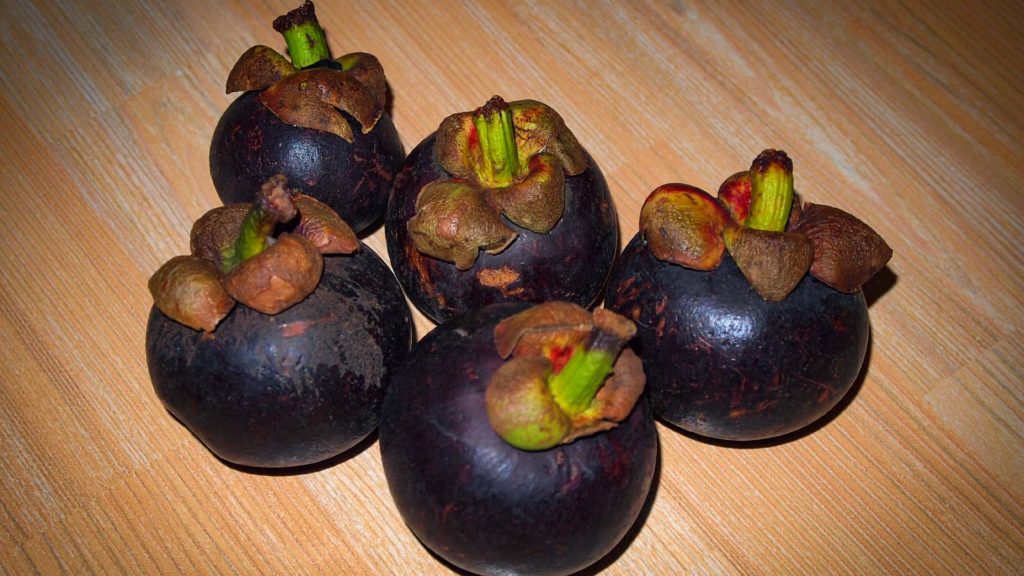 The mangosteen has a leathery skin that you must crack to get to the fruit inside. The skin should be as smooth and shiny as possible. Then you know you're getting a good, ripe fruit. Be careful with the peel, because it leaves a dark color and can easily stain (that's why it's banned in some hotels). 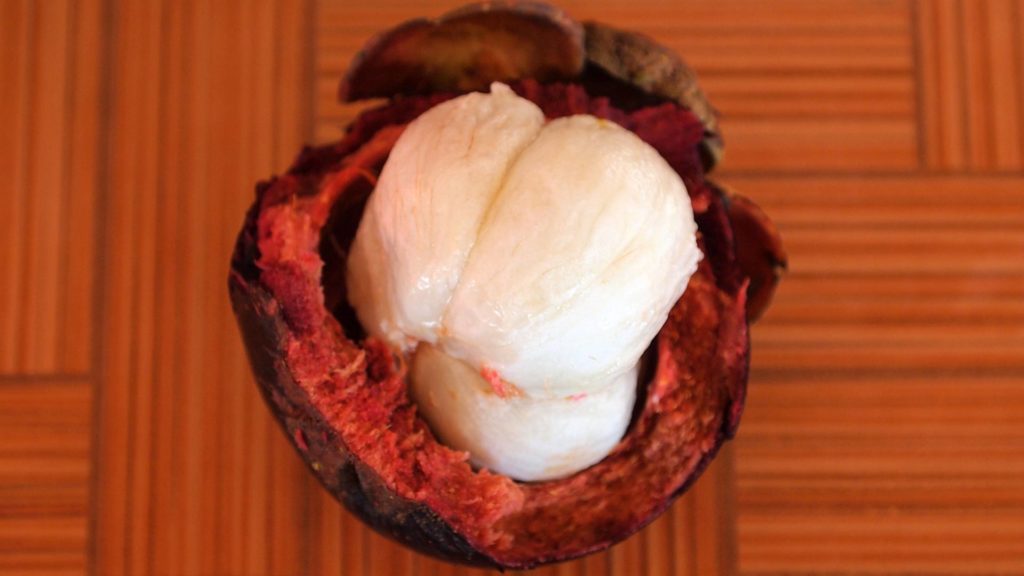 The salak fruit is also called the "snake fruit", because its skin is somewhat reminiscent of the scales of a snake. Originally it comes from Indonesia, where I also tried it for the first time. But also in Thailand you can buy the salak in many places. There are several varieties and in Thailand you often find rather the slightly smaller, lighter and redder fruits.

The taste is depending on the fruit and variety something between sweet and sour. The flesh is harder than many other fruits. The salak fruit is also considered a good natural remedy for diarrhea. 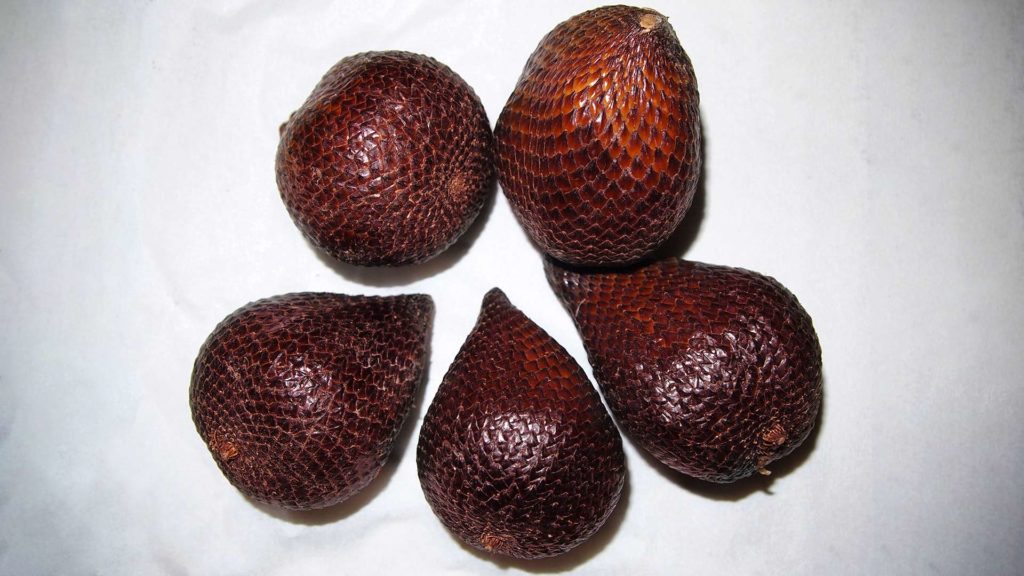 By the way, the Thai name "Som" has nothing to do with Som Tam salad. Oranges are therefore not a component of Som Tam.

The dragon fruit stands out from afar with its bright color and you will recognize it immediately. You can hardly confuse the dragon fruit with any other fruit in Thailand. Few people also know that it grows on a cactus.

The taste of the white and very soft pulp is not very intense, but it tastes very good and is healthy. The pulp is very reminiscent of that of a kiwi, only in white instead of green. The dragon fruit is also very popular in fruit shakes. 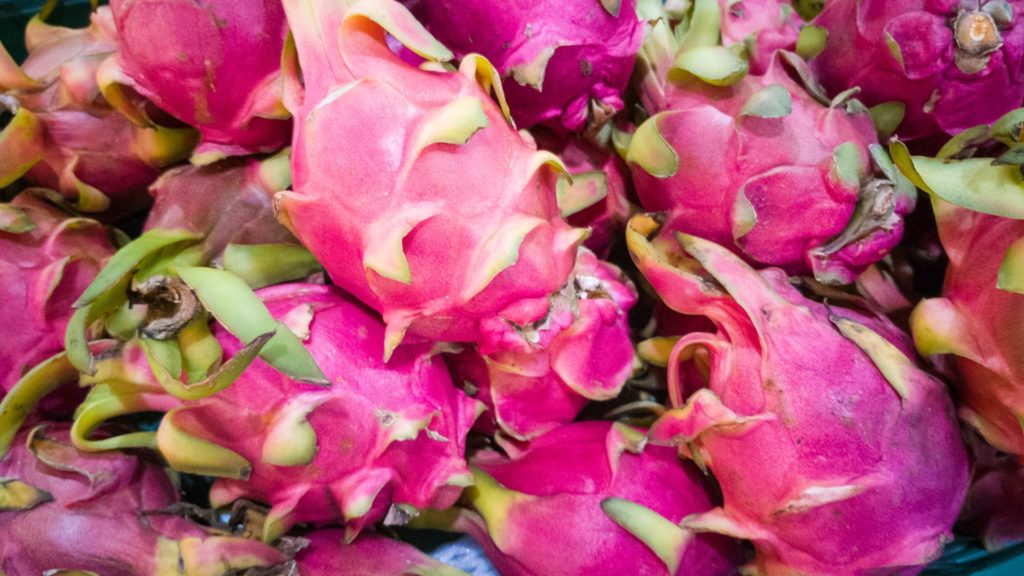 The Java apple is a fruit you probably haven't heard much about. At least not if you've never been to tropical countries. In fact, this fruit reminds a bit of an apple, but the flesh is much more watery. Other than that, these fruits don't have much to do with apples and in terms of size and shape, they resemble a pear. 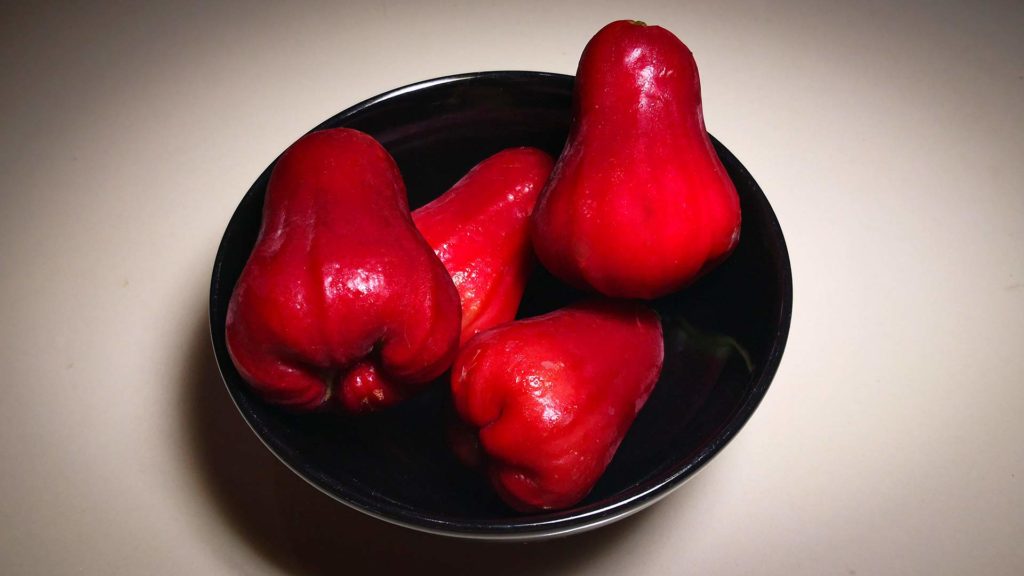 The guava was brought to Thailand many hundreds of years ago by Frenchmen and probably got its name from that. Because the name for foreigners in Thailand is "Farang" and also France is called "Farangset" in Thai. Thus, the fruit has simply received this name.

In Thailand, a not quite ripe guava is very popular as a snack. It is cut into small strips or pieces and then eaten together with a dip of sugar and chili. 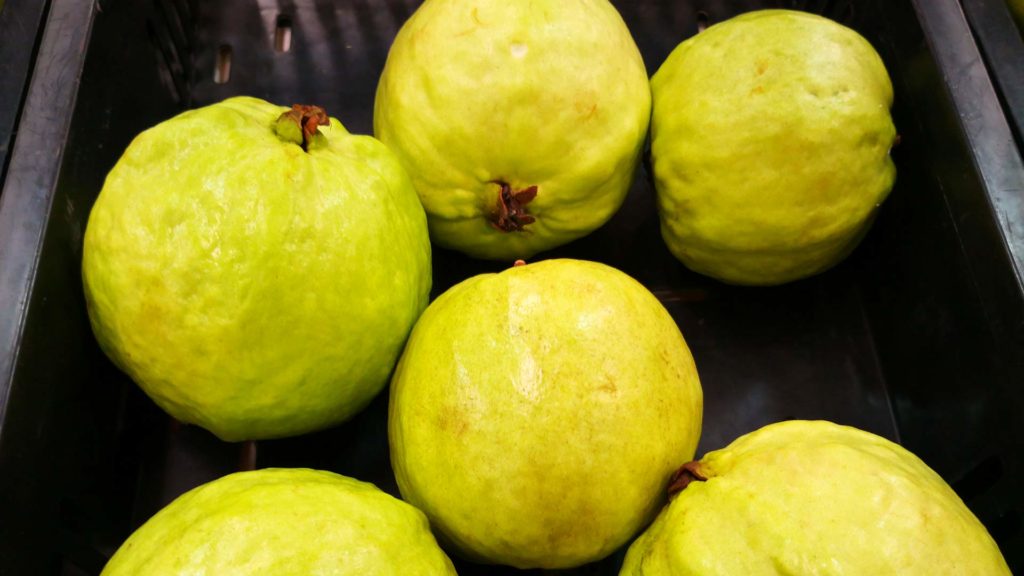 This "hairy" fruit is very popular in many countries of Southeast Asia. It is already noticeable by its appearance and is therefore unmistakable. Inside is egg-shaped white pulp (with core), which is very healthy. It contains carbohydrates, calcium, magnesium, zinc, iron, sodium, proteins and important vitamins. 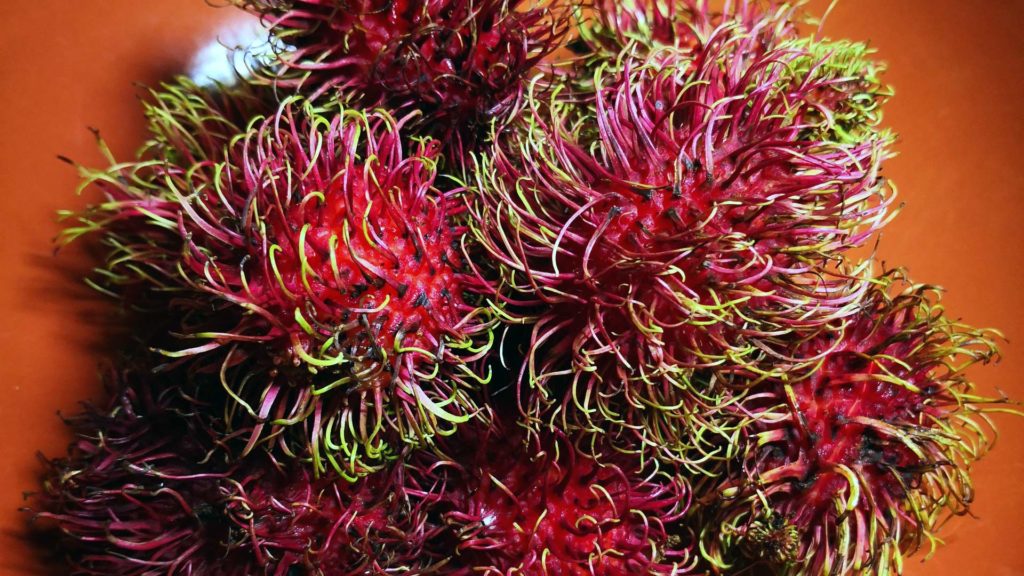 Another vitamin bomb, this fruit, closely related to the rambutan, grows on trees and has white, soft flesh inside that can be very sweet. It's a bit reminiscent of sweet grapes, but also slightly sour. Once you get the hang of opening the peel quickly and easily, it's hard to stop eating lychee. 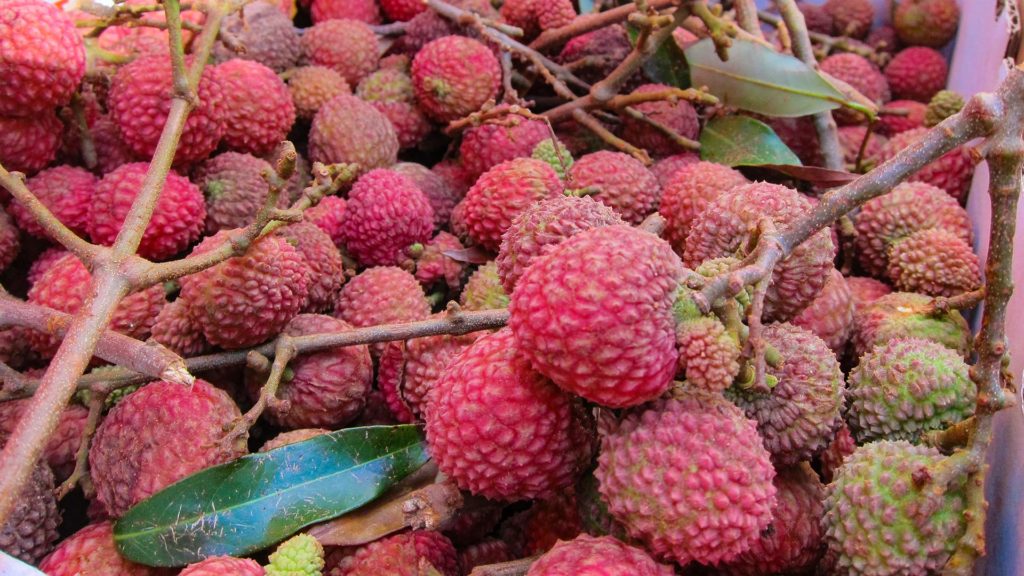 Longan is another lychee-like fruit that grows on trees. In season it is very popular among locals in Thailand. The fruits are round and about 3 cm in size. Often longan is confused with longkong and longsat fruit, which also exist in Thailand.

Longans are very sweet and aromatic. You can just bite open the skin to enjoy the white flesh. Inside there is a seed that is not eaten. The longan is sold in many places in Thailand: fresh produce markets, supermarkets, or even on the road at longan vendors.

Even though they look totally different from the outside, lychees, rambutans and longans are very similar in flesh and taste. Which of the three is your favorite, you'll have to find out for yourself. 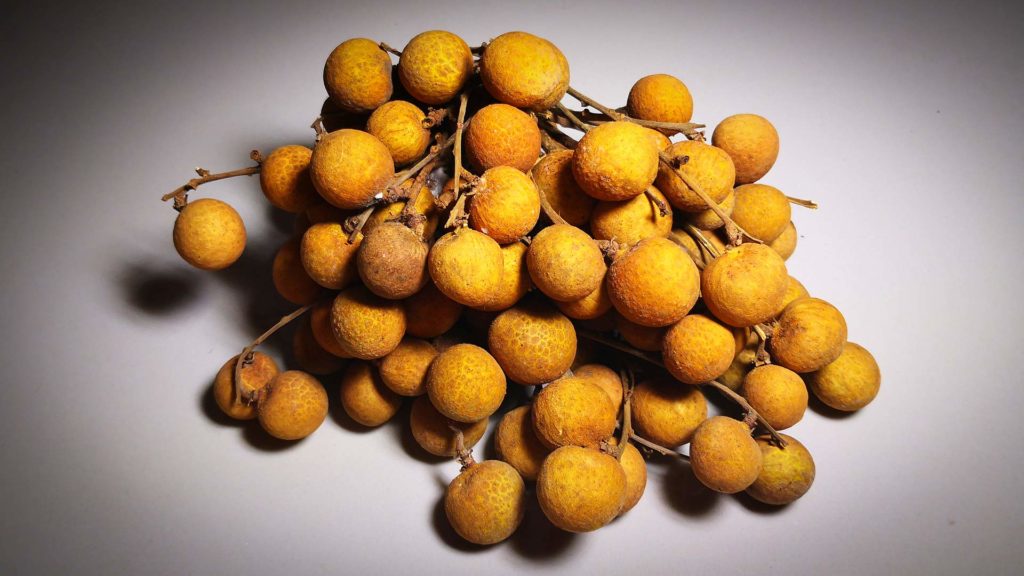 The cinnamon apple is a real insider tip among the fruits in Thailand. I also got to know this exotic very late. The taste of this fruit is unique and quite sweet, even has actually a creamy cinnamon flavor. Definitely try it if you find it anywhere. 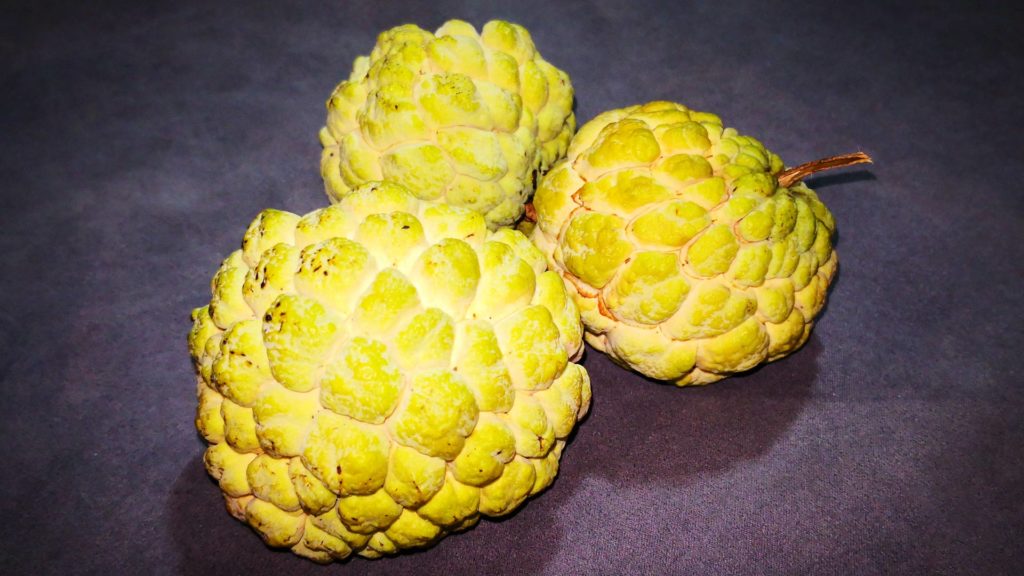 A fruit that tastes like caramel? Doesn't exist? Yes, there is! The sapodilla doesn't look particularly inviting from the outside, almost like a small potato. Inside, however, it offers a true taste explosion. The flesh of the ripe sapodilla is incredibly sweet and soft. A mixture of caramel and a sweet pear. Not to be missed when you're in Thailand. 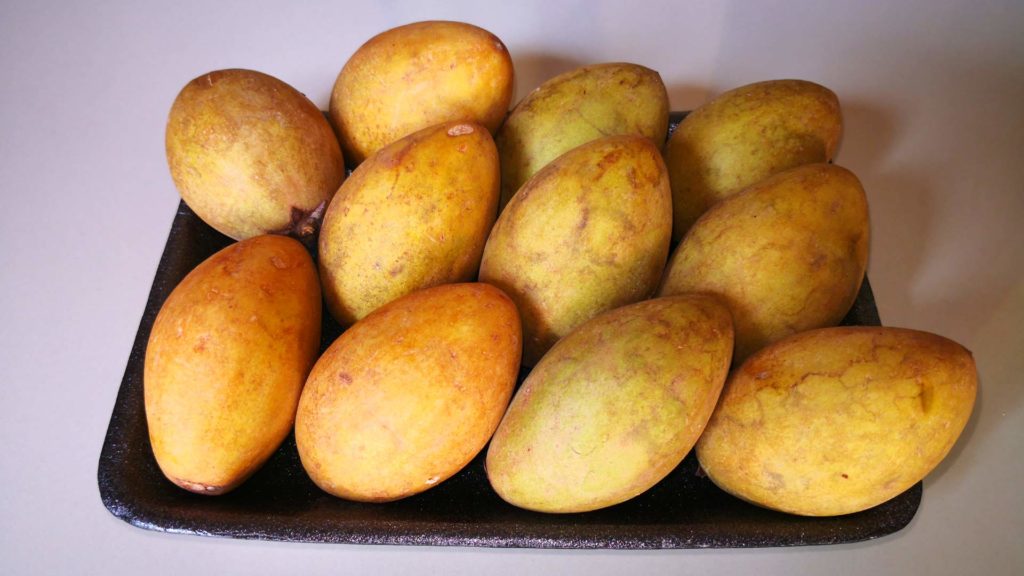 But be careful when buying. If the fruit is unripe, it is completely the opposite of sweet and tastes very unpleasantly bitter. If the flesh is soft on the outside and you can press it in, you know it's ripe.

That was not even all the fruits that are available in Thailand. You get offered many more fruits besides the ones mentioned above. Fruits that are natural and cheap in our country are very expensive and even special in Thailand. The best example is the strawberry (Stroberi, สตรอว์เบอร์รี่), which can only grow in the somewhat colder areas in the north due to the climate. Accordingly, it is expensive and not always available.