Having a shiny, waterproof makeup, banana leaves are commonly used to enhance the appearance and visual appeal of many different kinds of dishes, namely Asian. These large, thick leaves are versatile in the way they can be used to present, cook and even serve foods, making every dinner feel more exciting. Use these leaves for grilling, steaming, baking and more by folding them into little packets to cook your food inside of and change the way you start looking at dinnertime presentation. The leaves are strong, robust and full of antioxidants to add just another reason to the list of why you should cook with them.

What are banana leaves?

The banana leaf is a waterproof, flexible, smooth leaf that is not only used in cooking but tends to be thought of as beautiful enough to be used for decorating. The shiny leaves are very versatile in the way they sometimes can be used as an ingredient, but they are most commonly used as a method of decoratively plating and serving different foods. 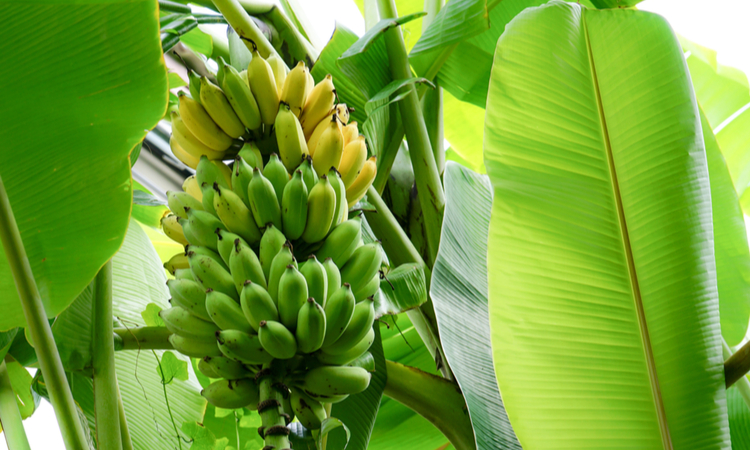 What do banana leaves add to dishes?

Banana leaves are a surefire, quick way to add a more appetizing look to your foods. They can be used as a background for presenting your food more beautifully when laid flat against a pan, or they can be turned into little "packets" that can be bent to hold onto the food inside of it. You can even grill food inside of the banana leaves to enhance their taste and appearance. Alongside grilling, you can also use banana leaves to bake your food or steam it. In Thai and other Asian cooking, the leaves are used as the plates themselves, so that you can eat right off of them with no plate required. They can be frozen, so that you can use them again and again for a long period of time, and they only take around half an hour to thaw, so they are always ready for use.

Do banana leaves have any nutritional values?

Banana leaves are best known for their unsuspected potent antioxidant content. The amount of antioxidants in these leaves may help to slow down cellular aging in the body while also reducing signs of premature aging of the skin, including fine lines and wrinkles. Not only are they rich in antioxidants, the leaves are also full of flavonoids, vitamins and vital proteins that help to nourish the body.

Burns represent a major challenge for doctors and patients when changing dressings. Because changing the dressing material is accompanied by severe pain. The L.T.M.G. Hospital in India started using banana leaves as a wound dressing as early as 1994, an application that has been continuously optimized over the past few years. In the first study in 2003, 30 volunteers with burns were tested and found that the daily change of dressing caused only minor pain. This success was attributed to the waxy, non-wounding and cooling surface of the banana leaves. In addition, the banana leaf dressing provided good protection for the wounds and also supported the healing process. he second study again involved 30 patients who required skin transplantation due to severe burns. They were then all treated partly with a vaseline gauze and partly with a banana leaf dressing to compare the two applications. Among the criteria were: pain in general, pain during dressing changes and handling. The test persons rated the banana leaves as superior in all points. In addition, wound healing was also faster: with the banana leaf wound dressing it was completed after about 8 days and with the vaseline gauze only after about 12 days. The researchers were interested in establishing an effective wound dressing on the one hand, but also a free one on the other, which is particularly relevant in poor countries.

If you want to use banana leaves as a compress and wound dressing for mild to moderate burns and other skin irritations, you should definitely go for organic products. Dr. Berchem recommends rinsing the banana leaf well with running water and sterilizing it beforehand. There are various procedures for sterilisation. You should be particularly careful when treating open wounds. Studies have shown that steam sterilisation is the most effective method of sterilising banana leaves. This can be carried out using an autoclave, i.e. also with a steam pressure pot (stage 3 for 15 minutes). The healing properties of the banana leaf are nevertheless retained.

As mentioned above, banana leaves can replace aluminium foil, which has now come under criticism,  when it comes to cooking, grilling, cooking, steaming or baking food wrapped in it. Banana leaves enable very healthy food preparation, as they prevent the ingredients and thus the taste of the food from dissolving in steam or transferring to the cooking water. The food remains particularly juicy and also takes on the special flavour of the banana leaves. In Asian cuisine, fruit such as plantains, rice and fish are particularly popular for wrapping in the decorative leaves. In South India banana leaf curries are conjured up and in the Philippines rice cakes wrapped in banana leaves called Suman are very popular. In the Indonesian cooking method "Pepes" all kinds of ingredients like rice, mushrooms, fish or tofu are filled into banana leaves and then steamed or grilled on fire. The dishes are always prepared with a mix of herbs and spices such as chili, ginger, tamarind and lemongrass. In Latin American countries, besides rice, meat is cooked in combination with vegetables in banana leaves. For example, Nacatamal - a dish from Nicaragua - contains pork, rice, potato slices, peppers, tomatoes, onions,  garlic, olives, chilli and mint. These delicious traditional dishes can also be presented in a wonderful vegetarian form by replacing the meat with, for example, chickpeas or tofu. So aluminium foil is really no longer necessary if you have a banana leaf at hand.

How are the banana leaf packets made?

There are many different methods, which you can teach yourself with a little skill and practice. The packets can be closed with green rice straws, but also with toothpicks or kitchen string. Videos on YouTube can be very helpful as illustrative material. If the leaves are very firm, they should be heated in hot water for a short time. This makes them soft and easier to wrap. 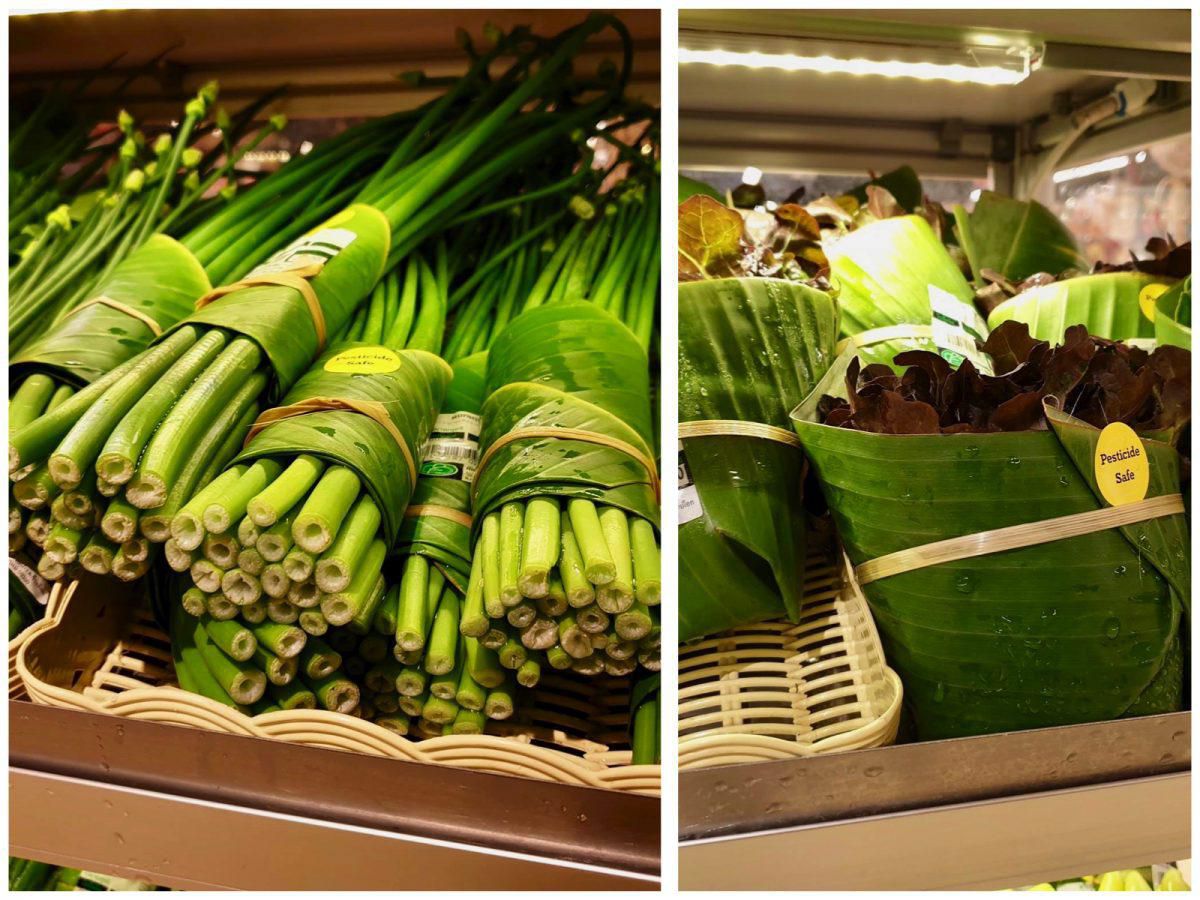 Banana leaves are available, for example, in gourmet shops, Afro and Asian shops or in relevant online shops. They are offered either fresh or deep-frozen. In one of our articles on banana purchasing criteria we have already gone into detail about the fact that numerous pesticides are used, especially in South American banana plantations. Although the banana leaves usually come from different regions than the export bananas and are often picked from wild plants, you should better opt for organic quality when buying - regardless of whether you want to use the leaves for medicinal purposes or in the kitchen.

Banana Leaves in your garden

It is also possible to plant out the banana plant in the garden. It is especially important to choose a location which should be bright but also sheltered from the wind. If the plant is exposed to wind or even a storm, the leaves will be badly torn up. Some hardy varieties such as Musa sikkimensis (Darjeeling banana) or Musa yunnanensis (wild forest banana), which mostly originate from Asian mountain regions, are now available on the market.

But even the frost-resistant banana plants absolutely need winter protection to survive the cold months without damage. For this purpose, a separate "house" is erected for the plant before the first frost with the help of four thick wooden posts and a close-meshed wire. The root ball is covered with a layer of leaves - e.g. maple or oak leaves - at least 40 centimetres thick. When the cold season is over, the plant quickly produces new leaves, which can then be cut off with sharp scissors if necessary.

History and Origin of Bananas

Many people think that bananas are just the sweet and yellow fruits that you find in any supermarket. There are bananas that are staple foods in other countries - especially in tropical regions - but only in very special shops in our country. Basically we distinguish between the sweet bananas, which are so popular in our country, and the "cooking bananas", which are not suitable for consumption in raw condition. Cooking bananas, which are reminiscent of potatoes due to their starch content in taste and bite, can be eaten both in the ripe and unripe stage after appropriate preparation. Compared to sweet bananas, plantains have a significantly lower water content. Both types of banana have been proven to have been used by humans as food as early as the seventh century BC. According to an old legend from the area of the present state of Myanmar (situated between India and Thailand), it was the birds that led the way for humans - one of the first known names for the banana therefore had the meaning "the birds told it". The original banana looked slightly different from most of the species we know today - the large black seeds surrounded by fruit flesh have disappeared from most banana plants cultivated today, probably as a result of the crossing of different species. The banana fruit does not grow on trees, but on so-called "perennials" - firm leaves that are so close together that they look like a trunk. The banana plant bears fruit only once, after which it dies. Depending on the variety, it can grow up to six meters high.

Although the perennials of both banana varieties look like palm trees, the term "palm tree" is incorrect. The banana plant is green all year round and only thrives under tropical climatic conditions - lots of sun, average temperatures of at least 27 degrees Celsius and sufficient rainfall. The soil must not be too firm so that rainwater can drain away. It also needs sufficient shade, otherwise the fruit would be damaged. It takes about two years for the banana plant to bear fruit - afterwards the plant dies. New plants are not created from a seed, but by "shoots" of the mother plant separating (or being artificially separated) and then taking their own roots in the soil. At the age of about eight months, a single "inflorescence" grows at the top of the plant, from which the red-coloured female flowers emerge. Later, bananas grow between the flowers and a single male flower protected by brownish coloured leaves - the weight of the fruit bends the inflorescence downwards. About 20 bananas each grow finger-like next to each other, one speaks of the "fingers" of a "banana hand" (the name "banana", by the way, goes back to the Arabic word for fingers). More than two years can pass until the fruits themselves, which botanically belong to the "berry" family, have grown to full size. A single banana plant bears between ten and 20 banana hands, an average of around 300 fruits, which together weigh between 35 and 50 kilograms. Normally, the colour of the fruits, which are usually crooked, is green, which changes to yellow as they ripen - but there are also red and blue coloured fruits. When the fruits have ripened, the mother plant dies - without human intervention, the sapling, which takes root near the mother plant, survives in its place.