Before we get to the health benefits of eating turmeric powder, we would like to tell you more about the root itself. A part of the Curcoma longa genus, turmeric is a root of a flowering plant that is often harvested and ground up to be used as a spice in many different cuisines across the world. It is well loved for its savory, slightly spicy flavor and orange hue that can help influence the color of the food and give it a more appetizing appearance. Not only is turmeric delicious, but it is full of plentiful antioxidants that help to detox the body and stop premature aging of cells, while its anti-inflammatories help to reduce pain due to swelling and inflammation.

Turmeric is a plant that comes from the ginger family. It is called Curcoma longa and is a flowering plant whose roots are commonly used for cooking because of the unique flavors they give off. Before the roots can be used, they are often ground up into a fine powder, which makes them easier to work with, and the powder comes out a rich orange color. The color can make any dish look more appetizing, thanks to its robust color.

Turmeric comes from South Asia and has been used in India as a spice and remedy for several thousand years. The yellow root belongs to the ginger family, but does not taste as hot as ginger, but rather mildly spicy and slightly bitter. Turmeric contains various essential oils and the polyphenol curcumin. Both ingredients contribute significantly to the health-promoting and healing effects of turmeric. Curcumin, for example, has anti-inflammatory and antioxidant effects - and is said to be able to relieve pain in osteoarthritis. We offer turmeric as a powderor in the form of capsules as micelle turmeric (e.g. from piperine), which increases biocompatibility. Turmeric gives most Indian curry mixtures their yellow colour. The spice is suitable for colouring and seasoning rice dishes, ragouts or chicken, for example. The root also tastes good in smoothies or as turmeric latte.

What is turmeric powder?

Turmeric powder is simply the powdered form of the turmeric root and is what is most commonly used to cook with. Because it is so thin and fine, turmeric powder is easy to incorporate into foods of many types without leaving behind a grainy feel.

What can you do with turmeric powder?

Turmeric powder is versatile with its savory flavor that helps to add plenty of robust taste to meats while also adding just a bit of a spicy kick. It can be used in everything from soups and chilis to sauces and savory dips.

Turmeric powder is full of components such as curcumin that many people turn to for its health benefits. One of the main perks of eating turmeric is its natural wealth of anti-inflammatories. These anti-inflammatories help the immune system maintain a healthier state, so that it can deliver a more appropriate response to inflammation. By doing this, the body can regulate problems such as painful joints and even taking care of killing bacteria. The curcumin in turmeric is also known for its natural inclusion of antioxidants that work hand in hand with the immune system to help detoxify the body.

Turmeric has an anti-inflammatory effect

Acute, short-term inflammation helps the body to repair damage and protects against dangerous bacteria. However, if inflammation becomes chronic, it can damage the body. Studies show that chronic inflammation can promote or cause diseases such as metabolic syndrome, cancer, Alzheimer's disease or heart disease. The curcumin contained in turmeric has a strong anti-inflammatory effect and is therefore used to prevent and treat diseases. Some studies have even compared the effectiveness of curcumin with anti-inflammatory drugs. However, pure turmeric powder contains just three percent curcumin. In order to achieve optimal health-promoting and medical effects, it is advisable to use curcumin extract. Curcumin extract is available either on the internet or in health food shops. The absorption of curcumin into the bloodstream is improved by combining it with black pepper.

The antioxidant properties are another reason why the health benefits of eating turmeric powder are so insane. Oxidative damage is caused by free radicals, which are highly reactive molecules with unpaired electrons. Free radicals react with organic substances such as fatty acids, proteins or DNA and can thus cause diseases and accelerate ageing processes. Antioxidants protect the body from free radicals. Curcumin is not only anti-inflammatory, but also has a strong antioxidant effect. Due to its chemical structure, curcuminoids can neutralize free radicals and thus render them harmless. Curcumin also promotes the activity of the body's own antioxidants. Thus free radicals are combated particularly effectively.

Nerve cells are able to network with each other anew. In some regions of the brain, nerve cells can even multiply. The growth factor BDNF (Brain-derived Neutrotrophic Factor), the so-called neurotrophic factor, is decisive for this proliferation. BDNF is a type of growth hormone that is active in the brain. Some brain dysfunctions, such as depression or Alzheimer's disease, have been linked in scientific studies to reduced levels of BDNF. Studies show that the curcumin contained in curcuma increases the concentration of the growth factor BDNF. Curcumin thus effectively helps to delay or even prevent brain diseases and age-related limitations in brain function. In Alzheimer's disease, insoluble plaques form between neurons in the brain. Recent research shows that curcumin helps to influence the composition of these plaques and could thus be used to treat Alzheimer's disease.

Nutrition expert Professor Dr. Heiner Greten explains what plaque actually is and how existing deposits can be influenced: "Plaque consists of different substances: soft - the fats - and hard, the calcium. A plaque that has already calcified cannot be broken down. It rests like an iceberg in the ocean current and hinders it. It is not possible to remove it or at least reduce its size, but it is possible to influence its composition: 'Desired' is a plaque that is as hard as possible and does not break open - because a soft plaque that breaks open can lead to a blood clot. However, further studies of the effect of curcuminoid in the brain are necessary to scientifically confirm its curative effect in Alzheimer's disease. 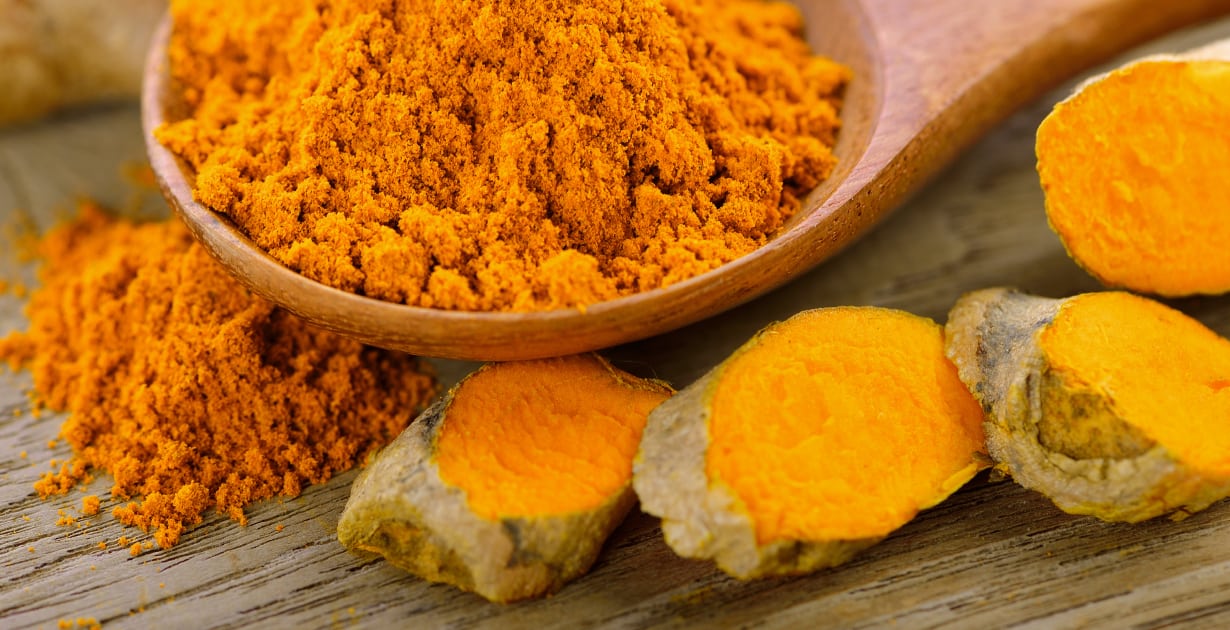 The health benefits of eating turmeric powder when speaking of heart diseases are great too. Heart disease is one of the leading causes of death worldwide. Heart diseases are very complex and are influenced by many different factors. Polyphenol curcumin has been shown to reduce the risk of heart disease (and cholesterol levels) due to its anti-inflammatory, antioxidant, anti-thrombotic and cardiovascular effects. Curcumin also strengthens the functioning of the endothelium of the heart. The endothelium is a vascular coating that regulates the exchange of substances between the blood and the vessels. Reduced endothelial function affects blood pressure regulation and blood clotting and is a major cause of heart disease. Due to its endothelium-strengthening effect, curcumin contained in turmeric reduces the risk of heart disease.

Turmeric for protection against cancer

Another factor that speaks for the health benefits of eating turmeric powder is its protection against cancer. Research is currently underway to determine the extent to which turmeric can be effectively used for the prevention and treatment of cancer. The curcumin contained in turmeric can influence the development, growth and distribution of cancer cells. Studies show that curcumin can inhibit the growth of blood vessels and metastases and contribute to the death of cancer cells. Some laboratory studies with animals show that curcumin inhibits the development of cancer cells. Although the studies to date are promising, further research is needed to ensure the efficacy and medical applicability of curcumin against cancer.

One of the health benefits of eating turmeric powder is that it calms your stomach. Turmeric, especially the polyphenol curcumin contained, helps with digestive problems and calms the stomach. Turmeric promotes the digestion of fat in the stomach and intestines and thus prevents a feeling of fullness and flatulence after a high-fat meal. The effectiveness of turmeric in treating inflammation of the digestive system has been scientifically proven.

We've got more additional information about the health benefits of eating turmeric powder. Curcuma belongs to the ginger family and tastes mildly spicy and slightly bitter. The root contains essential oils and the active ingredient curcumin, which make turmeric so healthy. Curcumin has a strong anti-inflammatory effect and is therefore used to prevent and treat diseases such as metabolic syndrome or cancer. Curcumin also has a strong antioxidant effect. The active ingredient contained in turmeric can neutralize free radicals and promotes the activity of the body's own antioxidants. Turmeric, or curcumin, strengthens the concentration of the growth factor BDNF (brain-derived neurotrophic factor) in the brain. This promotes the multiplication of nerve cells and reduces diseases and impairments of the brain. Curcumin also has a positive effect on the health of the heart as it has antioxidant and anti-inflammatory effects and strengthens the functioning of the endothelium. It is scientifically proven that turmeric helps with digestive problems and calms the stomach. Now that you've this contribution, you should know more about the health benefits of eating turmeric powder. Stay tuned for our next contributions.