The health benefits of Kabusecha Green Tea are incredible. But first, let's tell you more about Kabuse itself. Kabusecha is a tea variety that falls under the umbrella of Sencha tea. When kabusecha is processed, it undergoes a similar process that is virtually identical to the one that is used to create Gyokuro. What makes kabusecha different from other tea styles comes in the way that the tea is cultivated to begin with. The tea plants are usually found in the same field as Sencha plants and then they are harvested to begin processing. The tea plants are wrapped up about a week before the harvest to get them out of the sun to start the special process. These teas are usually found in between different Gyukuro and Sencha tea plants that are also shaded through artificial methods, all of which falling under the category of "shadow teas."

What is Oishi Green Tea Kabusecha?

Oishi Green Tea Kabusecha is a combination drink that is a blend of green tea and kabusecha shadow teas. The combined teas offer a unique flavor, one with the lightness and refreshing nature of green tea blended with the robust, full-bodied taste of kabusecha. The result is a one-of-a-kind flavored drink that many people enjoy every day. 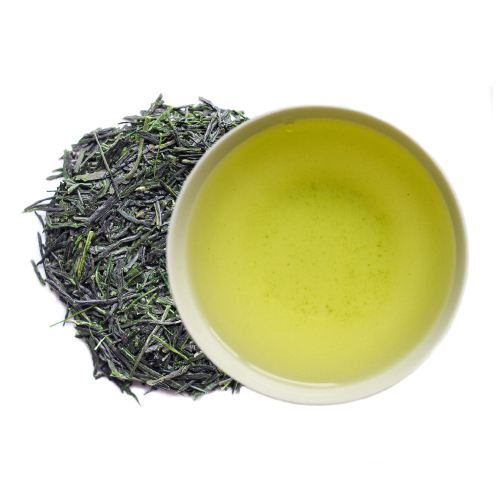 What are the health benefits of Kabusecha Green Tea?

Firstly, many people enjoy the tea as an alternative to sweet, sugary sodas, and by swapping out this Oishi Green Tea Kabusecha for soda pop, you are automatically making a healthier decision. It is full of green tea, which is a known antioxidant, able to help reduce the premature aging of cells both in the body and on the skin to reduce physical signs of aging. On top of this, the antioxidants may also be able to give your immune system a boost.

What are the effects of Kabusecha?

Wild tea bushes used to grow rarely in the blazing sunlight, but mainly in partial shade. In those days, of course, it was not nets or bamboo mats that kept out the sun's rays, but the shade provided by trees growing nearby. In this way, the shading of the tea meets the natural and original conditions of the tea bush. Kabusecha tea leaves are characterized - depending on the exact time of plucking - by a bright, greenish or rich dark green color. After infusion in the cup, the appearance of the tea ranges from emerald tones to a greenish gold with a slight cloudiness.

But the real speciality is the taste. This is because the shading not only ensures that Kabuse tea contains more active ingredients than conventional green tea, but also a special aroma that is not clouded by bitter taste notes. Kabuse Cha has a fresh character and tastes pleasantly nutty. On the finish it is characterized by a fine, harmonious sweetness that rounds off the taste. This convinces not only tea connoisseurs, but often also tea novices.

Why is Kabusecha so exclusive?

The cultivation of Kabusecha tea is much more complex and involves higher costs than with conventional green tea varieties - for example, with classic Sencha. Special shade nets not only have to be made, but also maintained and gradually renewed. In order not to damage the sensitive tea plants and young shoots, the nets are also placed on the tea bushes by hand and not mechanically, and are removed again shortly before picking. This effort is not visible in the Kabusecha, but you can taste it - in the form of the extraordinary aroma.

Kabuse (jap.: かぶせ茶, Kanji: 冠茶) literally means "covered" in Japanese and refers to the shading of this noble green tea before harvest. The Kabuse cultivation technique was developed at about the same time as for the fully shaded Gyokuro, which - together with Matcha - is Japan's finest and most expensive green tea variety. The Gyokuro was first introduced to the market in 1835 by the tea merchant Kamei Yamamoto as a shaded, steamed and rolled green tea.

Kabusecha is basically produced in the same way as Gyokuro, but the difference lies mainly in the length and the type of shading. Kabuse tea is usually shaded for only about half the length of Gyokuro and with greater light transmission. However, both types of tea are usually steamed and rolled like a Sencha.

By shading the green tea, the tea farmer reduces the conversion of the valuable amino acids formed in large quantities in the roots to catechins (special, also very healthy bitter substances). These are normally formed as antioxidants in the leaves and buds by the sunlight as it rises over the stems. As the shade increases, more amino acids remain in the plant and fewer bitter substances are produced. In particular, the main amino acid L-theanine of green tea is thus enhanced. To compensate for the lack of light, the tea plant produces significantly more healthy chlorophyll.

The special taste of Kabusecha

A Kabusecha therefore has significantly more umami, amino acids, sweetness and chlorophyll than an unshaded Sencha. Nevertheless, it still has a considerable amount of catechins and bitter substances, so that its taste ranges between the elegant and sweet Gyokuro with an extremely high amount of umami and the noble-bitter Sencha with great complexity.

In addition, for upmarket Kabusecha qualities, the seed varieties (cultivars) particularly suitable for shading are used. These include Goko, Okumidori, Saemidori, Asatsuyu and Komakage. These cultivars have different ingredients than the tasty main seed variety Yabukita, which is well known for Sencha, and therefore also produce different taste characters. They are fuller, richer, have more amino acids/umami, are more sweet and sometimes show nice vegetal, fruit or berry notes. At the same time, however, there are also many very high-quality Kabusechas from the Yabukita on the market, which then develop a little "straighter" and "harder". So you can benefit from this variety of seeds both in terms of taste and health.

The effect of Kabusecha

The effects of the health benefits of Kabusecha Green Tea are incredible. At this point we will only briefly discuss the effect of the Kabusecha. It virtually combines the positive characteristics of the two important green tea varieties Sencha and Gyokuro. Thus it possesses the great advantageous properties which are said to be associated with green tea and can be described as extremely healthy. However, due to its composition, it does not achieve the effectiveness of drinking the respective more expressive main varieties Sencha and Gyokuro (as well as Bancha) throughout the day. Kabuse tea is a welcome healthful change and in terms of taste a delicacy for green tea lovers who want to enjoy a lot of umami and also noble bitterness in one tea.

As in the cultivation of the Gyokuro, different shading techniques are used for the Kabusecha. The highest quality and most traditional method is the use of scaffolding to which mats or nets are applied. This technique is called tana. With this technique, the distance between the cover and the tea plants allows a much better indoor climate to be created, which is very beneficial to the quality of the tea. A much cheaper and less complex variant is the jikagise technique, in which the covers, usually in the form of plastic nets, are stretched directly onto the plants. Kabuse teas made with the Tana technique achieve a much higher quality. Depending on the quality of the tea and the climate zone / prefecture, the Kabusecha is shaded for different lengths of time. For simpler qualities, this is usually about 10 days before harvesting, good qualities about 14 days and highest qualities greater >20 days (up to 40 days). By the way, in regions with the highest solar radiation, such as in Kagoshima, shading for more than 14 days is hardly possible. However, it is sometimes common here to shade Senchas 1-3 days before the harvest, because otherwise the leaves would have too many bitter substances. This has nothing in common with a Kabusecha. A further difference to the Gyokuro is that the nets for the Kabusecha are usually equipped with a higher light transmission, i.e. eta 50-70% transmission, while with the Gyokuro about 70-98% is chosen.  Further details about the different shading techniques can be found in the article Gyokuro Tea.

After the harvest, the Kabusecha is processed in the same way as the Sencha or Gyokuro (steaming, cooling, rolling, drying). However, the kabusecha leaves contain slightly more moisture and are often more delicate. Accordingly, the care in the process and the drying of the Arachas (raw tea) is very important. Since the Kabuse already has a very full character, it is often steamed only briefly (about 20 seconds - Asamushi), i.e. shorter than the normal steaming time (Chumushi = 30-40 sec.) of most Senchas. 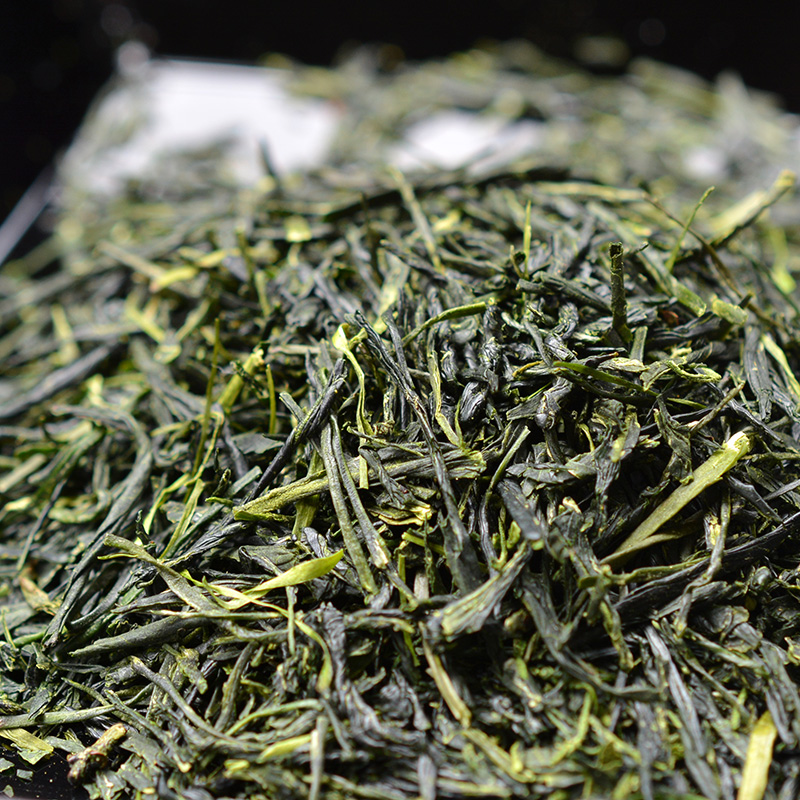 Durability and maturation of Kabusecha

Gyokuro and Matcha teas are known for the special fact that green teas rich in amino acids do not necessarily taste and act best when freshly harvested, but that a few months of maturing are beneficial. The following rule of thumb applies to Kabuse as a "hybrid" of both worlds between Sencha and Gyokuro: Those who value the umami can safely allow upscale Kabuse qualities to mature for up to 2 years (original sealed airtight packaging) and will be pleased with the progressive change in aromas. A good tea from the previous year's harvest can therefore be a special treat and is sometimes sold for considerably less.

If, on the other hand, you pay attention to the noble bitterness, you should drink the tea rather freshly harvested, as recommended for Sencha (or Shincha). I personally appreciate the great mildness and balance of matured teas, both in Kabusecha and especially in Gyokuro. It is only important that they have been stored professionally at a cool temperature and airtight. Buy Kabusecha: Quality, taste and price
As with all green teas, there are large differences in quality and price on the market for Kabusecha. The main criteria are listed in the following table. Most important are: the terroir or tea farmer, the duration of the shade, the shading technique, the type of seed and the type of harvest. When buying, I avoid those suppliers who do not provide all the essential information.

Lower temperatures can be used for good qualities of the relatively delicate Kabusechas. At higher temperatures the valuable amino acids suffer and the less noble and more astringent tannins get more into the water. As a rule of thumb for Japanese steamed green tea, the 60°C water temperature with 2 minutes brewing time can also be recommended here. For those who want to enjoy the amino acids more, we recommend 55°C or even 50°C for top quality. Depending on your taste, the tea can of course also be drunk hotter. Good Kabusechas are particularly suitable for several infusions. All in all, I recommend - as is usually the case with all Japanese green teas - no more than 2 minutes brewing time at individually varying temperatures. Next time when you're thinking of drinking a healthy drink, think about the health benefits of Kabusecha Green Tea.