How many uses of cumin powder do you know? We will tell you all about them soon. The effect of cumin sounds almost too good to be true: For indigestion, diabetes, inflammation, and more, cumin seed is said to help. The popular spice is even said to support weight loss. But is that true?
Cumin (Cuminum cyminum) belongs - just like parsley - to the umbellifer family. Also known as cumin, it is now cultivated from the Mediterranean region to Southeast Asia. Cumin seeds have been used in Indian cuisine and medicine for thousands of years and have long since found their way into the European region. However, cumin is in no way related to real caraway seeds.
In Ayurveda, cumin has been used for a long time to treat various ailments, and in the meantime, its manifold effects have been scientifically and widely covered. We explain why you should use the spice as often as possible in the kitchen.

Before we to the uses of cumin powder, let's tell more about what it is. Cumin is a spice that is most commonly used in red meat dishes, Indian-style curry dishes, and more. It has an earthy brown-red color that helps to make stews, soups, sauces, and anything else it is used to make a richer, meatier-looking dark brown-red hue, instantly adding to its visual appeal. Cumin is also aromatic, able to stimulate the appetite just by inhaling its scent.

Cumin powder has a very distinct flavor that can easily be picked out when it is mixed into other food. It has an earthy base with hints of nuttiness within it. It is full of spicy flavor that has a slightly bitter undertone to it, making it a versatile spice for those who want the flavor of spicy foods without too much of the heat. It effortlessly enhances the flavor of meat, especially beef. The aroma of cumin is warm and robust with small hints of lemon. Because of the taste, the uses of cumin powder are almost infinite. 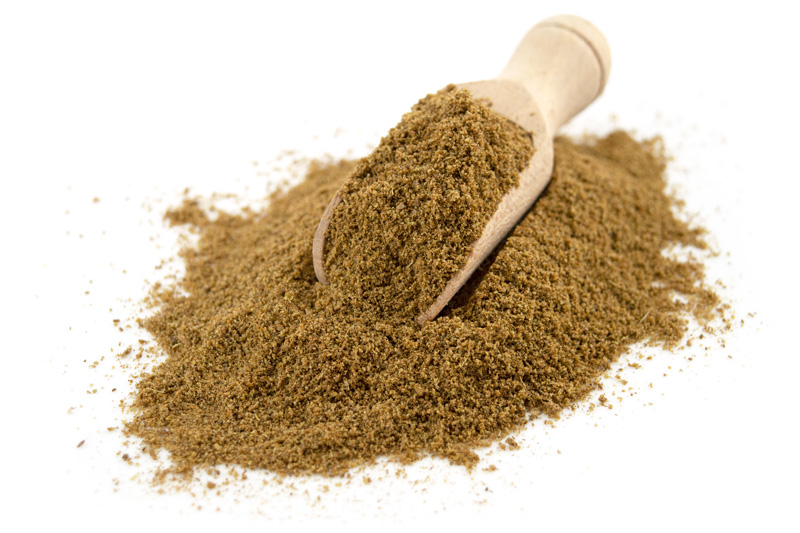 Uses of cumin powder: soothing effect for the digestion

The uses of cumin powder in terms of digestions are an untold story. Traditionally, cumin has been a popular household remedy for many types of digestive problems. Particularly in the ancient Indian art of healing Ayurveda, it has always been considered an effective remedy for almost all problems and diseases concerning the stomach and intestines - from chronic diarrhea to acute gastritis.
By stimulating the production of digestive juices such as saliva, pancreas and gastric juice, cumin stimulates digestion. A study on rats showed that cumin helped food to be digested and processed more quickly. This is partly due to the fact that cumin seed increases the activity of digestive enzymes (2008 study).
Cumin also helps with constipation, as it stimulates intestinal peristalsis. But cumin can also help with diarrhea (study from 2014). At the same time, it reduces flatulence and indisposition.
In another study, a positive effect was found for irritable bowel syndrome: Over a period of two weeks, 57 patients consumed cumin in concentrated form and noticed a significant alleviation of symptoms.

Effect with a diet

In the western cultural area, cumin is also known for its supporting effect in diets. As so often, there was sometimes talk of a "miracle cure".
And indeed, in a clinical study with a placebo counter group, cumin was shown to be just as effective against overweight as a weight loss pill containing orlistat. Even better: the insulin levels of the test persons also improved. A further study from 2014 confirms these results: 88 overweight women had taken 3g of cumin seed daily as a powder for three months, which reduced body weight and body fat percentage.
If you want to lose weight in a healthy and sustainable way, cumin alone is of course still not enough. However, when used regularly, cumin seed can be very supportive of a balanced diet and a healthy lifestyle. As you can see, the uses of cumin powder can also be found in diets.

Other effects and areas of uses

Uses of cumin powder against Diabetes

In studies, cumin oil has already been successfully used for diabetes mellitus. After eight weeks of use, blood sugar, insulin and HbA1c levels were significantly lowered.

Another study on rats concludes that cumin seed can also prevent stress. The researchers also found that cumin is a more effective antioxidant than vitamin C.

This point is particularly interesting from a health point of view. As an antioxidant, cumin helps with the negative effects of so-called free radicals, such as damage to DNA. This has been confirmed by another study.
Immune system: Further research has shown that cumin can also positively support the immune system and help with some bacterial and fungal infections.

That's what makes cumin so healthy

Cumin is also a potent source of natural anti-inflammatories and is lauded for its ability to help reduce painful inflammation and swelling in the body. While doing so, cumin also promotes a healthier inflammation response of the immune system to reduce pain going forward. Alongside being an anti-inflammatory, it is also known for its antioxidant properties that may help flush the body of harmful toxins and other compounds that may cause premature aging of the cells.

Many of the health effects of cumin can already be attributed to its analyzed ingredients:

Numerous secondary plant compounds are found in the seeds of cumin, some of which have been proven to have antioxidant properties and help with flatulence.
Essential oils: Cumin consists of up to 6 percent essential oils, primarily cumin aldehyde. This is responsible for the fact that the spice boosts the production of digestive juices.

Cumin seeds are particularly rich in iron, manganese, copper, calcium, magnesium, phosphorus, and zinc. (You can find more information about the respective mineral and its effect by clicking on the keyword).

Cumin also provides several B vitamins, including thiamine (B1), vitamin B6, niacin (B3), riboflavin (B2). It also contains vitamin E, vitamin A, and vitamin C, all of which have an antioxidant effect. The uses of

Cumin also contains polyphenols, which belong to the flavonoid group. These are also considered antioxidants.

Uses of cumin powder in the kitchen

In the kitchen, cumin is just as versatile as in its health effects: the spice is not only part of curry spice mixtures and goes perfectly with all Indian dishes and rice dishes, but is also ideal as an ingredient in bread and pizza dough. No classic hummus can do without cumin, and the spice also fits into many dips and sauces. If you are cooking lentils, black beans, or chickpeas, you can also add the seeds to the pot as a whole.
Tip: Roast the seeds lightly in advance. Then the cumin unfolds its full aroma even better. Otherwise, you should at least grind the seeds with a mortar and pestle or in a spice mill.
If you have acute symptoms, you can also chew the cumin seeds pure - or you can eat them with some honey. In Ayurveda, this is especially recommended on an empty stomach in the morning.
You can also prepare a cumin tea from the seeds and benefit from the health effects of the spice.
Diabetics should be careful with the spice and discuss its use with their doctor, as cumin - as mentioned above - affects the blood sugar level.