The Ottoman Empire has given great gifts to the world, especially the heritage of Turkish cuisine, which has amalgamation and sophistication of many culinary cultures including central Asian, Middle East, East Europe, and Balkan. But, today we can see that Turkish Food has influenced many of its neighboring cuisines and blended diverse culinary traditions while creating a vast collection of specialties. However, when it comes to breakfast, Turks usually prefer very rich breakfast options and In a typical Turkish breakfast, you will have loads of cheese, butter, olives, eggs, tomatoes, cucumber, strawberry jam, sausages and most importantly Kunafa. The rich hash brown Kunafa is a very distinctive recipe in Turkish breakfast and made off with hash browns that you can prepare at home. In the center, you will have cheese layers and for a crispy shiny look, we will coat the outer layers of Kunafa with vermicelli and olive oil. Potato and cheese lovers will cherish this recipe and serve with traditional Turkish tea. So let's start this astounding recipe but first note ingredients. 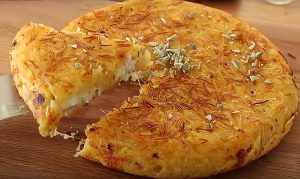 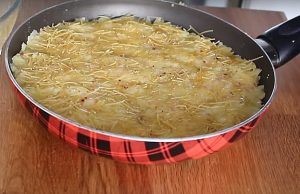 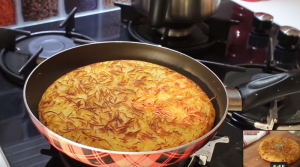