Strong sun and relenting, strong winds of Benkovačko - Stankovačko vineyards give the Benkovačkim wines a colorful character. It all began at the time of the Venetian Republic. Many diseases that have attacked the grape wine in Italy and France motivated the wine industry in this region. Interesting to know that before this time the wine production in Dalmatinska Zagora was forbidden. The Roman ruins of Assyria (Podgrađe), the castle of Sopot of Prince Branimir from IX. St. And Kastel of the noble family Benkovac, whose last name stands at the origin of the name Benkovac, describes the rich history of this area. The village Korlat is nearby and is named after the Croatian nobility family Korlatović. The Korlat vineyard is planted right next to the village; Surrounded by Mediterranean herbs and shrubs overlooking the magnificent Adriatic Sea! The vine grows literally from stones, which contribute greatly to its excellent quality. The wine was awarded 10 international medals in the first year. (Decanter, Vinitaly, Parisian Wine Fair and Bruxelles)

The town of Benkovac was named after the Croatian Count Benkovići, who had their seat in Kaštel of Benkovac. Kaštel of Benkovac, where you can find a museum today, was an old Croatian fortress, converted by Benkovići into a castle after the Turks came in the 16th century. There are many historical monuments in the area, but one of the most interesting is the foundation of Count Branimir from the ninth century (Šopot), the remains of the Roman colony of Assyria (Podgrađe) and the church of St. Antun from 1743 onwards Medieval and held until the 19th century. This area became a cross-border fortress and an important crossroads connecting the cities on the north coast of Dalmatia with Croatia. 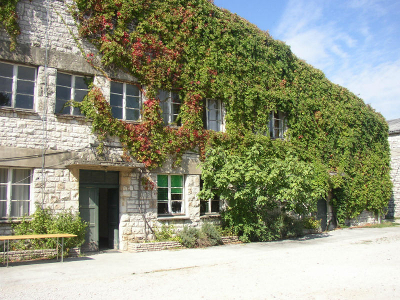 The Benkovac Winery was built in 1956-1957 according to the examples of the existing winery in the south of France. It consists of three different buildings, one for primary processing, the other two for care and ripening. Benkovac winery is still very attractive today. The roof and part of the façade are covered with ivy, which gives it a beautiful, extraordinary view, and the large wine cellar provides enough shade. Strong sun, strong wind, and rocky ground characterize the location of Benkovac. The Benkovac Winery was known until 2005 until the new vineyards were built in Korlat near Benkovac. Benkovac Winery is famous for its wine brandy and the finest wines from which the old and European Glembay brandy is made.

Korlat plant material originally comes from France and the assortment is called Syrah, Cabernet Sauvignon, and Merlot. The work on the vineyard began Korlat in March 2004. Due to the severity of the area preparation, the work lasted until the spring of 2005. In the same year, the first 73 hectares were planted, and in the following year followed another 30 hectares. A total of 550,000 vines were planted. The project of Badel 1862, to plant vineyards so large in the rocky terrain, can be regarded as a pioneer work. This vineyard was created under extreme conditions. The highest position is 300 meters above sea level and was cultivated towards the sea. For the surface, which was covered with macchia, machines such as excavators and bulldozers were used, which had to work the soil. The plot was worked with so-called rippers. They were intended to break at a depth of 70 - 100cm, stone slabs in the ground. Thus, a structure Korlat Weinbergim was created in the soil, in which it is possible to plant vines in order to enable them to find a path between the stones to form the right roots. The biggest problem was the existing remaining roots of the former Macchia. These first had to be completely removed to prevent further growth of these bushes completely. The first grapes harvested by Korlat in 2007 were sufficient for 9,000 liters of first-class red wine or 12,000 bottles. At the end of 2010, these were the first commercial bottles on the market. In the next two to three years, the production is estimated to be about 400 to 450,000 liters of quality red wine.