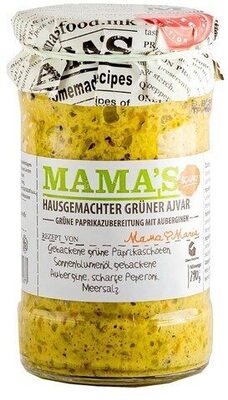 Somewhere in the southern Balkan, in the old Skopje restaurant Dukat, three friends were in a restaurant. Their names were Petar, Kalin, and Boban. The three gourmets had a real Macedonian business meeting. In Macedonia, such a meeting is held while the table is full of food. The friends had a feast, which consisted of cold plates with various meats, appetizers, cheese, salads, rakija, and wine. They were not aware that this delicious meal would be the reason for their groundbreaking business idea. Fascinated by the various ajvar varieties, Lutenica, Pindzur, the dried and chopped peppers, and all the other known types of peppers, Petar suddenly interrupted unexpectedly: "This Ajvar is brilliant, I swear only my mother does better than this!" The other two did not know whether he was consciously aware of the hot chili. Next, Boban expressed with a full mouth that his mother added a special spice to the Ajvar and that hers is the most delicious Ajvar in the world. Kalin said that the secret to the success of an Ajvar is not in the spice, but in the love that his mother gave when preparing the Ajvar. There was no end to the discussion about the best Ajvar on this day. The three friends looked up at the waiter and asked for his opinion. Immediately without hesitation, he said that his mother made the best Ajvar in the world. So the debate went on and did not go unnoticed. As a listener, the owner of the restaurant, Mitko, joined the discussion and said, "My mother makes the best Ajvar." This is how Petar, Kalin, and Boban began the search for the best Ajvar.

The three friends, therefore, tasted many different Ajvar varieties with different flavors and spices. They found out that every housewife has her own recipe with her own ingredients. So they took it as a basis for their own Ajvar, added the ingredients of the recipes of their mothers, and combined them with the collected ideas until they finally came to the "Mama's homemade Ajvar". The main ingredients for this recipe come from Strumica and Valandovo. These are places with perfectly suitable climatic conditions for the harvest. In honor of all mothers in Macedonia, Petar, Kalin, and Boban proudly present "Mama's Ajvar", the pepper dip for all demanding Ajvar lovers.