Brandy is a popular dark liquor that is in fact “burned wine” or in other words, a liquor distilled from wine. It can also be distilled from other fruit wines like apples and pears. Amongst the multiple types of brandy that are available, the most popular one is Cognac (also known as Hennessy). Cognac is made from special grapes that are native to a particular region in France. After a long day of work, coming home and cozying up to a warm glass of brandy is a feeling unlike any other.

Where can I buy brandy?

Visit our food database and find a seller that suits you. We have a wide range of sellers and products.

How is brandy made?

It is a distillate of wine. The basis for distillation is grapes. EU-wide regulations govern which spirits may call themselves brandy. For example, 100% of the alcohol must come from a finished vinified wine. This may be white wine or red wine or a mixture. The wine distillates must also be stored for a certain time before bottling: at least six months in small wooden barrels (with a capacity of less than 1,000 liters) or at least twelve months in larger wooden barrels. As a rule, however, brandy matures for much longer, often years to decades. Flavoring is not allowed, but sometimes a very small percentage of caramel is added for coloring.

For a long time, cognac was considered a collective term for wine brandies, but then the protected designation of origin came into use. Today, a Cognac must come from the region of the same name in France and is subject to even more guidelines (approved grape variety, distillation method, minimum age for classification as VS, VSOP, XO, etc.). Slightly related to Cognac is Armagnac from a different region and with different types of distillation. Weinbrand is the German word, but theoretically a German Weinbrand is also a Brandy. Indeed, that is now the generic term for all brandies. However, some insist that the term is mainly used for the brandy from Spain. In addition, there is the brandy from Italy and other countries such as Greece and Portugal, among others. The brandy from Germany is also associated with some regulations. By the way, brandy is not a synonym for brandy, because the latter refers to all distilled spirits, including those made from raw materials other than grapes.

The raw material makes itself felt. Brandy often smells and tastes fruity, although one does not necessarily always think of grapes. The longer the wine distillate has been allowed to mature in oak barrels, the more other tones join in. Thus, a brandy may taste nutty or spicy, woody or sweet.

How do you drink brandy?

Like Cognac, German brandy or Spanish brandy is drunk in a short, bulbous glass with a wide base that tapers slightly toward the top. The Cognac swirl both allows the spirit to release its aromas and condenses them before they reach the nose and mouth. Brandy glasses are simply a must for proper tasting. Premium quality brandies should be drunk neat, and they don't need to "breathe" like wine, nor do they like ice. Younger products can be used for cocktails with brandy. The ideal drinking temperature for brandy is room temperature, optionally in a pre-warmed brandy glass. When tasting around 60 cl of brandy, first sniff and then enjoy sips at a time.

Brandy from Spain has an incredibly long tradition. It is produced mainly - but not only - in Andalusia in the city of Jerez de la Frontera, where sherry is at home. Such a Brandy de Jerez is stored according to the solera method. Young, medium-long matured and old wine distillates come together to obtain a blend rich in finesse at the end. Traditional brandy from Spain is sometimes allowed to rest for a long time, which can be recognized by classifications such as Reserva and Gran Reserva. Well-known brands of brandy from Spain include Osborne, Cardenal Mendoza, Gran Duque d'Alba and Lepanto.

Brandy from Germany has also been produced for centuries, and usually with great attention to detail, on a rather small scale and according to unchanged recipes. Brandy from Germany belongs for many to a cozy evening, gladly as a cigar brandy or after dinner. If you want to buy noble brandy from Germany, legendary brands such as Chantre, Asbach, Mariacron and Jacobi are recommended.

Have you ever seen a bottle that states VS (Very Special) or has three stars? That is a unique symbol or term to tell you how long it has aged. If it has either of the two labels, it means that the brandy has been aging for at least two years. VSOP (Very Special Old Pale) has aged for at least four years while XO (Extra Old) has aged for at least six years. Hors d’age is a very special brandy that has aged for at least 10 years. This one typically has the year it was made on it. Brandy Croft is one of the oldest types of brandy and is produced in a "Croft House". It is produced from the finest wines and a well-established formula, making Brandy Croft a renowned fine brandy. In terms of taste and aroma, Brandy Croft boasts a mild taste and an earthy aroma. Most brandies typically range from 70-120 proof meaning that 35%-60% of the drink is alcohol; so in comparison to beer or wine, it is pretty strong. It is also most times stronger than, vodka whose proof range from 90-100 meaning 45%-50% is alcohol.

How does it look? 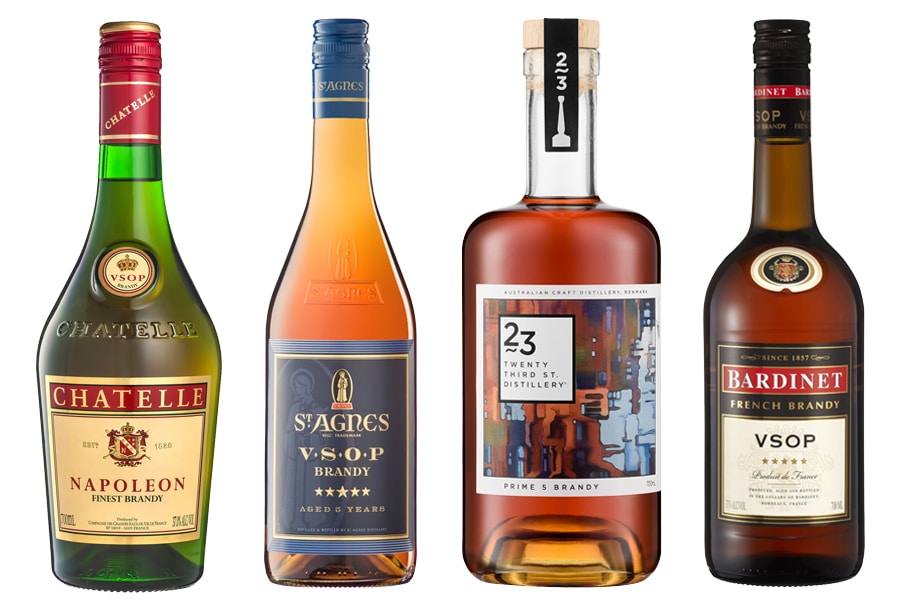 Brandy’s golden brown color looks rich and makes you feel just like that when sipping it. The color is derived from the aging process or added after to deepen or enhance it. People typically enjoy their brandy as is, but if you aren’t a fan you can add it to a cocktail. Popular cocktails include the hot toddy and dark and stormy. Some also recommend drinking it with citrus drinks since the combo is perfect- even a quick squeeze of lime or wedge will do. You can also try different temperatures since it influences the flavor notes that come out.

They say the smoother the better and this drink is no different. The longer the aging process, the smoother and more pronounced the flavors are. Now that you have expanded your knowledge, you can properly enjoy your favorite brands. Or, take a trip down the brandy aisle and pick up your very first bottle to impress your guests and family.